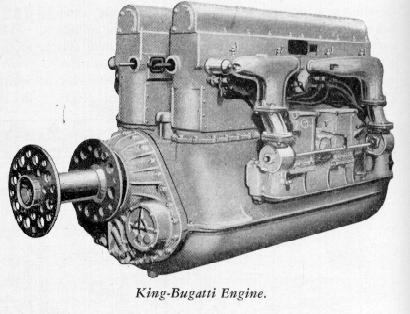 The U engine is a piston engine made up of two separate straight engines (complete with separate crankshafts) joined by gears or chains. It is similar to the H engine which couples two flat engines. The design is also sometimes described as a "twin bank" or "double bank" engine, although these terms are sometimes used also to describe V engines.

This configuration is uncommon, as it is heavier than a V design. The main interest in this design is its ability to share common parts with straight engines. However, V engines with offset banks can also share straight engine parts (except for the crankshaft), and this is therefore a far more common design today when both engine forms are produced from the same basic design.

A prototype British heavy tank proposed in April 1916 was intended to be powered by a doubled version of the 105 hp Daimler 'Silent Knight' engine, with two banks of cylinders side by side sharing a common crankcase. However this was not a true 'U' engine, as the cylinder banks were to have been independent, each separately driving its own crankshaft and four-speed gearbox. Neither the tank nor the engine were ever made.

The first U engine known to have been built was the 16-cylinder 24.3 litre displacement Bugatti U-16 aero engine designed and patented by Ettore Bugatti in 1915–1916.Bugatti licensed the design to Duesenberg in America, who produced about 40 of a modified version as the King-Bugatti, and Breguet of France, who built a few in the years after the end of World War 1. Bugatti later used the same engine layout in the Bugatti Type 45 of 1928, but only two were produced.

Starting in 1925, FIAT began preparing an engine and car for the new 1926 1.5 litre racing formula, adopted in both Europe and the USA.  For the engine, designated the 'type 406', FIAT chose to mount two 750 cc six-cylinder banks side by side on a common aluminium crankcase, with their crankshafts geared to a common output shaft. A single Roots-type supercharger driven from the nose of the right-hand crankshaft delivered mixture to a pair of intake manifolds located between the cylinder blocks at 13 lbs/sq. in boost. The left-hand crankshaft drove the single water pump. One centrally mounted camshaft operated the induction valves, which were on the inside of each cylinder bank; two camshafts mounted outboard drove the exhaust valves. Twin Bosch magnetos were driven from the tail of the central camshaft. The engine weighed 381 lbs, not excessive for the time. On test the unit delivered 187 bhp at 8,500 rpm at maximum boost.

The type 406 powered the Type 806 car to wins in the heats and the final of the 1926 Milan Grand Prix. However, opposition in the FIAT management to further racing, and the expiry of the 1.5 litre formula in 1927 meant the car and its engine were scrapped beyond recovery.

Matra developed a high-end Bagheera prototype powered by a 2.6 litre U8 engine made of two Simca 1000 Rallye 2 straight-4s connected by chains around 1974. However because of the petroleum crisis this car was never put in production.

Several types of U-form diesel engine have been historically produced, by companies such as Lister Blackstone and Sulzer Brothers Ltd. A twin bank diesel engine for marine use is described in US Patent 4167857. However, no further documentation has been found for any ship or marine application of such an engine.

The M4A2 version of the Sherman tank was powered by the General Motors 6046D twin diesel engine, a 12-cylinder twin bank version of the General Motors series 71 six cylinder supercharged two-stroke diesel. Each six cylinder engine unit displaced 6,965cc, and was separately clutched to a single output shaft, which was itself clutched to the transmission unit. The whole engine weighed 2,323 kg (5,110 lbs) dry weight, and produced up to 410 horsepower at 2,900 rpm with both units running. A total of 10,968 6046D-powered M4A2 Shermans were produced

If the crankshaft on one bank of cylinders is made to rotate in the opposite direction of the crankshaft on the other bank, then the gyroscopic effects of the rotating components would be canceled. However, counter-rotating crankshafts would make the joining of the power outputs very difficult.

An unusual variation on the U engine is the use of a single crankshaft which is linked to the pistons in both cylinder banks by rocking beams. This system was used in an eight cylinder petrol engine produced by the All-British Car Company between 1906 and 1908.