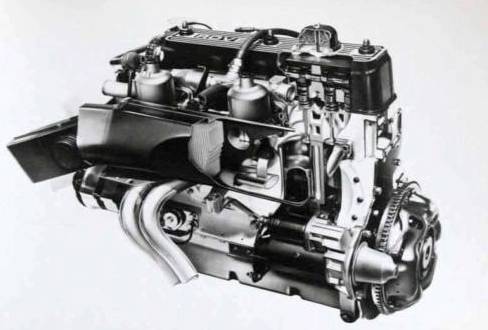 A naturally aspirated engine is an internal combustion engine, in which fuel intake depends solely on atmospheric pressure.

In a naturally aspirated engine, air for combustion (diesel cycle in a diesel engine, or specific types of Otto cycle in gasoline engines – namely gasoline direct injection), or an air/fuel mixture (traditional Otto cycle petrol engines) is drawn into the engines cylinders by atmospheric pressure acting against a partial vacuum that occurs as the piston travels downwards toward bottom dead centre during the induction stroke. Owing to innate restriction in the engine's inlet tract which includes the intake manifold, a small pressure drop occurs as air is drawn in, resulting in a volumetric efficiency of less than 100 percent – and a less than complete air charge in the cylinder. The density of the air charge, and therefore the engine's maximum theoretical power output, in addition to being influenced by induction system restriction, is also affected by engine speed and atmospheric pressure, the latter which decreases as the operating altitude increases.

This is in contrast to a forced induction engine, in which a mechanically driven supercharger, or an exhaust-driven turbocharger is employed to facilitate in increasing the mass of intake air beyond what could be produced by atmospheric pressure alone.

As a two-stroke diesel engine is incapable of natural aspiration as defined above, some method of charging the cylinders with scavenging air must be integrated into the engine design. This is usually achieved with a positive displacement blower driven by the crankshaft. The blower does not act as a supercharger in this application, as it is sized to produce a volume of air flow that is in direct proportion to engine's requirement for combustion, at a given power and speed. By the Society of Automotive Engineer's definition, a mechanically scavenged two-stroke diesel engine is considered to be naturally aspirated.

Most automobile petrol engines, as well as many small engines used for non-automotive purposes, are naturally aspirated. Most modern diesel engines powering highway vehicles are turbocharged to produce a more favourable power-to-weight ratio, as well as better fuel efficiency and lower exhaust emissions. Turbocharging is nearly universal on diesel engines that are used in railroad, marine engines, and commercial stationary applications (electrical power generation, for example). Forced induction is also used with reciprocating aircraft engines to negate some of the power loss that occurs as the aircraft climbs to higher altitudes.