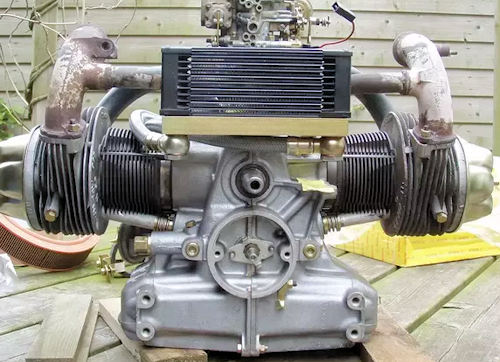 A flat-twin is a two cylinder internal combustion engine with the cylinders arranged on opposite sides of the crankshaft. It is a flat engine with two cylinders. Used in motorcycles for more than ninety years, flat-twins have also been used in automobiles, light aircraft, stationary powerplants, and household appliances.

There are two possible crank configurations for the flat twin. The more common is the boxer twin, with a 180 degree crankshaft with two crankpins, such that the pistons move in and out simultaneously. In some older applications, and in some flat-twin lawnmower engines, there is only one crank throw with a shared pin. This type of engine is not a boxer, but a 180 degree V-engine.

Flat-twin engines were used in several of Henry Ford's early cars, including the Ford 1903-04 Model A, Model C, and Model F.

Maytag used its Model 72 flat-twin engines to power washing machines, although they were used as proprietary engines for other purposes as well. Maytag began manufacturing the Model 72 engine in 1937 and, after a break in production from May 1942 to June 1945 due to World War II, continued manufacturing them until the 1950s. Production ended some time between 1952 and 1960.

Boxer-twin engines are well suited to the wasted spark ignition system, a distributor-less ignition system using a double-ended coil firing both spark plugs on each revolution, that is, on both the compression stroke and the exhaust stroke. This system requires only a single contact breaker and single coil to run two cylinders.