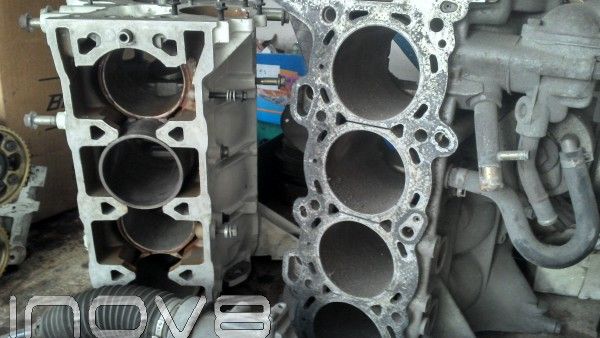 Engine configuration is an engineering term for the layout of the major components of a reciprocating piston internal combustion engine. These components are the cylinders and crankshafts in particular but also, sometimes, the camshaft(s).

Many apparently 'standard' names for configurations are historic, arbitrary, or overlapping. For example, the 180° V engine is so named because the crankshaft is related to a V engine more closely than it is related to other opposed-piston engines such as the boxer. Others would consider it a flat engine because of its shape.

The names W engine and rotary engine have each been used for several unconnected designs. The H-4 and H-6 engines produced by Subaru are not H engines at all, but boxer engines.

The standard names for some configurations are historic, arbitrary, or both, with some overlap. For example, the cylinder banks of a 180° V engine do not in any way form a V, but it is regarded as a V engine because of its crankshaft and big end configuration, which result in performance characteristics similar to a V engine. But it is also considered a flat engine because of its shape. On the other hand, some engines which have none of the typical V engine crankshaft design features and consequent performance characteristics are also regarded as V engines, purely because of their shape. Similarly, the Volkswagen Group VR6 engine is a hybrid of the V engine and the straight engine, and can not be definitively labeled as either.

The majority of four stroke engines have poppet valves, although some aircraft engines have sleeve valves. Valves may be located in the cylinder block (side valves), or in the cylinder head (overhead valves). Modern engines are invariably of the latter design. There may be two, three, four or five valves per cylinder, with the intake valves outnumbering the exhaust valves in case of an odd number.

Poppet valves are opened by means of a camshaft which revolves at half the crankshaft speed. This can be either chain, gear or toothed belt driven from the crankshaft, and can be located in the crankcase (where it may serve one or more banks of cylinders) or in the cylinder head.

If the camshaft is located in the crankcase, a valve train of pushrods and rocker arms will be required to operate overhead valves. Mechanically simpler are side valves, where the valve stems rested directly on the camshaft. However, this gives poor gas flows within the cylinder head as well as heat problems and fell out of favor for automobile use, see flathead engine.

With overhead camshafts, the valvetrain will be shorter and lighter, as no pushrods are required. Some overhead camshaft designs still have rocker arms; this facilitates adjustment of mechanical clearances.

If there are two camshafts in the cylinder head, the cams can sometimes bear directly on cam followers on the valve stems (tappets). This is the usual arrangement for a four-valves-per-cylinder design. This latter arrangement is the most inertia free, allows the most unimpeded gas flows in the engine and is the usual arrangement for high performance automobile engines. It also permits the spark plug to be located in the center of the cylinder head, which promotes better combustion characteristics. Beyond a certain number of valves, the effective area covered decreases, so four is the common-most number. Odd numbers of valves necessarily means the intake or exhaust side must have one valve more. In practice this is invariably the intake valves - even in even-numbered head designs, inlet valves are often larger in size than exhaust.

Very large engines (e.g. marine engines) can have either extra camshafts or extra lobes on the camshaft to enable the engine to run in either direction. Furthermore other manipulations of valves can be used for e.g engine braking, such as in a Jake brake.

A disadvantage of overhead cams is that a much longer chain (or belt) is needed to drive the cams than with a camshaft located in the cylinder block, usually a tensioner is also needed. A break in the belt may destroy the engine if pistons touch open valves at top dead center.