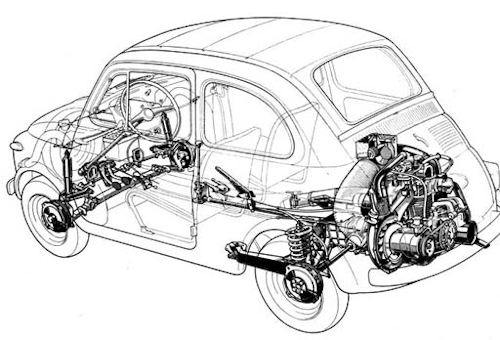 A straight-twin engine, also known as as straight-two, inline-twin, vertical-twin, or parallel-twin is a two-cylinder piston engine which has its cylinders arranged side by side.

Straight-twins have the advantage of being compact, relatively simple, and cheap to make in comparison to V- or flat-twins.As with any twin cylinder engine, they have an imbalanced firing action which causes vibration and inline-twins also suffer further from torsional torque reactions and vibration.

Unlike V-twins, straight-twin engines do not use a common crank pin for both connecting rods, each cylinder has its own crank pin. Most vintage British straight-twin motorcycle engines, such as Triumph, BSA, Norton and Royal Enfield, had two main bearings, the exception being AJS/Machless, which used a third, center main bearing.

Inline-twins were used in the early days of motoring in models such as the 1898 Decauville Voiturelle which used a pair of cylinders taken from a de Dion model mounted fore and aft and positioned below the seat.

In 1955, engineer Aurelio Lampredi designed an experimental straight-twin cylinder Formula One engine on the theory that it would provide high levels of torque for tight race circuits. The result was the 2.5-liter Type 116 prototype. Unfortunately, it vibrated so badly it broke the test bench and was never used in a racing car.

Current production cars that use a straight-two engine include the Tata Nano, which has a 623 cc engine, the Fiat 500 TwinAir, the Fiat Panda TwinAir and the Fiat Punto TwinAir, which have a turbocharged 875 cc engine.

Straight-twins have been used in farm equipment, notably by John Deere, whose large two-cylinder engines were used in their line of farm tractors up until 1960.

Such engines have commonly been used in snowmobiles, ATV, and Superkart.

The design has been used for two-stroke, four-stroke, and diesel engines,air-cooled and water-cooled, and aspirated by both carburettors and turbochargers.