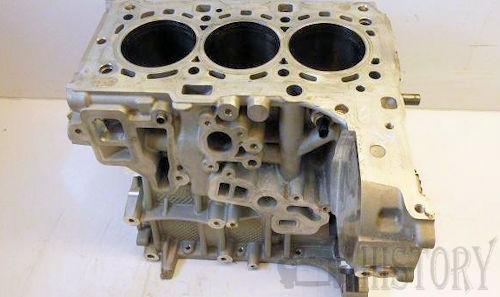 A straight-three engine, also known as an inline-triple,or inline-three (abbreviated I3 or R3), is a reciprocating piston internal combustion engine with three cylinders arranged in a straight line or plane, side by side.

Straight-three engines employ a crank angle of either 120° or 180°.

120° cranks are rotationally balanced; however, since the three cylinders are offset from each other, the firing of the end cylinders induces a rocking motion from end to end, since there is no opposing cylinder moving in the opposite direction as in a rotationally balanced straight-six engine. The use of a balance shaft in an antiphase to that vibration produces a smoothly running engine. 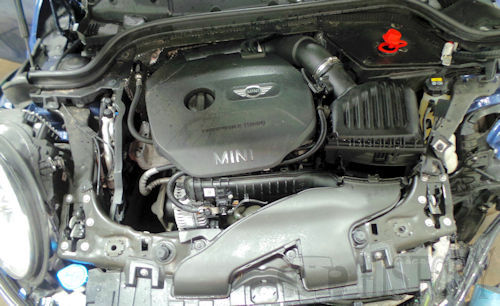 The Volkswagen Group is known for using three-cylinder petrol and diesel engines; in the Audi A2, Volkswagen Polo, Volkswagen Fox, SEAT Ibiza and Škoda Fabia. The engines in these cars range from 1.2 litre petrol with four valves per cylinder that deliver 47 to 65 kilowatts (64 to 88 PS; 63 to 87 bhp), to 1.4 TDI diesels that deliver 51 to 66 kilowatts (69 to 90 PS; 68 to 89 bhp) and have turbos with variable vane geometry and deliver outstanding economy, this particular engine is used in small cars of all marques of the Volkswagen Group. The most innovative three-cylinder engine the Volkswagen Group released was the 1.2 TDI diesel it was one of the first all-aluminium diesel engines, and at the time of release it was the lightest and most economic engine in production. It was used in the "3L" versions (from its diminutive fuel consumption of only 3 litres per 100 kilometres or 94.2 miles per imperial gallon; 78.4 miles per US gallon) of the Audi A2 and the Volkswagen Lupo.

Subaru used an straight-three in the Subaru Justy and the export version of the Subaru Sambar, called the Subaru Sumo, using their Subaru EF engine.

Mitsubishi has made extensive use of three-cylinder engines, which have also been used in Smart ForTwos since 2007.

In the 1950s and 1960s, the Saab 93, Saab 95, Saab 96, and certain DKW automobiles were powered by inline-three-cylinder, two-stroke engines. Also, the Wartburg automobiles manufactured in Eastern Germany, and FSO Syrena manufactured in Poland, used this kind of engine.

The first-generation Honda Insight (2000–2006) used a 1.0 litre inline-three engine in conjunction with an electric motor in its hybrid system.

TPCA are using a common inline-three-cylinder engine in models of Aygo, 107 and C1 respectively, but derived from Daihatsu.

Ford started offering their new 1.0 Ecoboost unit in the Focus from 2012. This new engine features several innovations, including the use of an unbalanced flywheel to remove the need to use balancer shafts.

Inline 3 engines are very common in diesel engined tractors, as well as other agricultural machinery. Nearly all manufacturers of diesel tractors have or have had models with 3 cylinder engines on their program. The perhaps best known example of any kind of 3 cylinder diesel engine is the Perkins AD3.152 that were used in Massey Ferguson 35 tractors, as well as in Fordson Dexta and several other tractors. This engine was also used for marine and stationary applications. Other examples of manufacturers include Nuffield(BMC), Bolinder-Munktell/Volvo BM, International Harvester, John Deere, Deutz-Fahr, Ford and many others.