Elva was a sports and racing car manufacturing company based in Bexhill, then Hastings and Rye, East Sussex, United Kingdom. The company was founded in 1955 by Frank G. Nichols. The name comes from the French phrase elle va ("she goes").

Frank Nichols's intention was to build a low-cost sports/racing car, and a series of models were produced between 1954 and 1959. The original model, based on the CSM car built nearby in Hastings by Mike Chapman, used Standard Ten front suspension rather than Ford swing axles, and a Ford Anglia rear axle with an overhead-valve-conversion of a Ford 10 engine. About 25 were made. While awaiting delivery of the CSM, Nichols finished second in a handicap race at Goodwood on March 27, 1954, driving a Lotus. "From racing a Ford-based CSM sports car in 1954, just for fun but nevertheless with great success, Frank Nichols has become a component manufacturer. The intermediate stage was concerned with the design of a special head, tried in the CSM and the introduction of the Elva car which was raced with success in 1955."The cylinder head for the 1,172 c.c. Ford engine, devised by Malcolm Witts and Harry Weslake, featured overhead inlet valves

On May 22, 1955 Robbie Mackenzie-Low climbed Prescott in the sports Elva to set the class record at 51.14 sec. Mackenzie-Low also won the Bodiam Hill Climb outright at the end of the season.

The 1956 Elva MK II works prototype, registered KDY 68, was fitted with a Falcon all-enveloping fibreglass bodyshell. Nichols developed the Elva Mk II from lessons learnt in racing the prototype: "That car was driven in 1956 races by Archie Scott Brown, Stuart Lewis-Evans and others." The Elva Mk II appeared in 1957: "Main differences from the Mark I are in the use of a De Dion rear axle as on the prototype, but with new location, inboard rear brakes, lengthened wheelbase, and lighter chassis frame." The car was offered as standard with 1,100 c.c. Coventry-Climax engine. This went through various changes up to the Mark IV of 1958.

Carl Haas, from Chicago, was Elva agent in the midwest of the United States from the mid-fifties through the nineteen sixties. In 1958 he was invited to England to drive an Elva in the Tourist Trophy at Goodwood, where he finished twelfth overall. With the Mark IV: "The major change is an all-new independent rear suspension utilizing low-pivot swing axles. The body is entirely new with close attention to aerodynamics and a reduced frontal area." At the Sebring 12 Hours sports car race in 1959 the #48 Elva Mark IV driven by Frank Baptista, Art Tweedale and Charley Wallace finished first in Class G, and 19th overall.

On June 21, 1959, Arthur Tweedale and Bob Davis won the Marlboro Six Hour Endurance Race in Maryland driving the #37 Elva Mk IV. Arthur Tweedale repeated the win in the Marlboro Six Hours in 1960. Teamed with Ed Costley he covered 337.75 miles in an Elva Mk V sports car. This was the final iteration of the Elva front-engined sports racing car. The last Mk V chassis won a number of important races in the midwest driven by Dick Buedingen, including the 1961 Elkhart Lake 500 teamed with Carl Haas. At this time Elva Cars Limited was operating from premises at Sedlescombe Road North, Hastings, Sussex, England.

Elva produced a single-seater car for Formula Junior events, the FJ 100, initially supplied with a front-mounted B.M.C. 'A' series engine in a tubular steel chassis. "ELVA CARS, Ltd., new Formula Junior powered by an untuned BMC 'A' Series 948cc engine. Price of this 970 lb. car is $2,725 in England. Wheelbase: 84", tread: 48", brake lining area: 163" sq. The 15" wheels are cast magnesium. Independent suspension front and rear with transverse wishbones, coil springs, and telescopic shock absorbers. The car is 12 feet, four inches long."Bill de Selincourt won a race at Cadours, France, in an Elva-B.M.C. FJ on September 6, 1959. Nichols switched to a two-stroke DKW engine supplied by Gerhard Mitter. In 1959 Peter Arundell won the John Davy Trophy at the Boxing Day Brands Hatch meeting driving an Elva-D.K.W. "Orders poured in for the Elva but when the 1960 season commenced Lotus and Cooper had things under control and disillusioned Elva owners watched the rear-engined car disappearing round corners, knowing they had backed the wrong horse." Sporadic success continued for Elva in the early part of that year, with Jim Hall winning at Sebring and Loyer at Montlhéry.

Elva produced a rear-engined FJ car, with B.M.C. engine, at the end of the 1960 season. Chuck Dietrich finished third at Silverstone in the BRDC British Empire Trophy race on October 1. In 1961 "an entirely new and rather experimental Elva-Ford" FJ-car debuted at Goodwood, making fastest lap, driven by Chris Meek.

After financial problems caused by the failure of the US distributor, Frank Nichols started a new company in Rye, Sussex in 1961 to continue building racing cars. The Elva Mk VI rear-engined sports car, with 1,100 c.c. Coventry Climax power, made its competition debut at Brands Hatch on Boxing Day, 1961, driven by Chris Ashmore, finishing second to the 3-litre Ferrari of Graham Hill. The car was designed by Keith Marsden.

On September 8, 1963, Bill Wuesthoff and Augie Pabst won the Road America 500, round 7 of the United States Road Racing Championship, at Elkhart Lake, Wisconsin driving an Elva Mk.7-Porsche. "The Elva-Porsche is based on the Mark VII Elva, but redesigned aft of the front section to take the 1,700 c.c. Porsche air-cooled flat-four unit and its horizontal cooling fan."

Edgar Barth won the opening round of the European Hill Climb Championship on June 7, 1964, at Rossfeld in southern Germany in an Elva-Porsche flat-8 sports car. The cars were placed throughout the seven-round series with Herbert Muller winning at the final round at Sierre Montana Crans in Switzerland on August 30, 1964.

Around 1964-1966 Elva made a very successful series of Mk 8 sports racers mostly with 1.8 litre BMW engines (modified from the 1.6 litre by Nerus) and some with 1.15 litre Holbay-Ford engines. The Mk8 had a longer wheelbase and wider track compared to the Mk7, which was known for difficult handling due to a 70-30 weight bias to the rear. Following the success of the McLaren in sportscar racing, Elva became involved in producing cars for sale to customers: 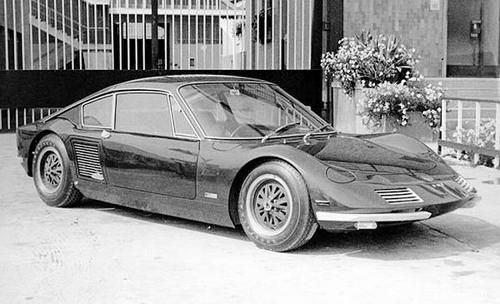 "Later a tie-up with Elva and the Trojan Group was arranged and they took over the manufacture of the McLaren sports/racer, under the name McLaren-Elva-Oldsmobile."

Luki Botha campaigned an Elva-Porsche in southern Africa from 1966. 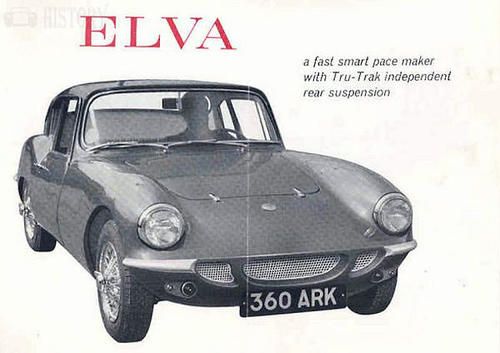