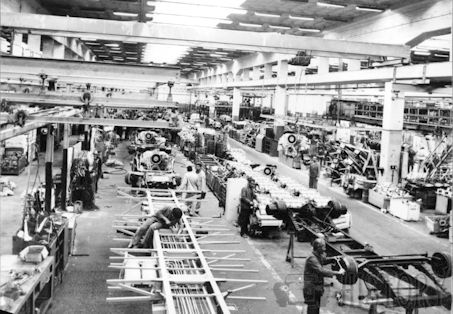 El Nasr Automotive Manufacturing Company was an Egyptian automaker a replacement for the Ramses company. Founded in 1959, the company was based in Helwan near Cairo . The brand name was Nasr .  2009, the production ended. From the former car producer is currently only a services division remained.

In 1960 or 1961, a license agreement with Fiat  was made then the production of motor vehicles began. The vehicles were also exported to neighboring countries in Africa and Arabia.

In 2000 was Engineering Automotive Manufacturing Co. (EAMCO) from El Nasr Automotive spun off, which at the time trucks , buses and tractors has made, so to speak, the commercial vehicle division of El Nasr Automotive has embodied and later an independent public companies has become.

In 2009, the Egyptian Ministry of Investment approved plans to have NASCO's parent company , the holding company for Metallurgical Industries , either close the business or sell it to a strategic investor . In May 2009, the number of employees was initially reduced from 10,000 - most recently around 1,000  - to 300, with the widest possible use of early retirement schemes , with the remaining 300 employees limited to a specific range of services. The car production is now set factually. The problems at NASCO had accumulated over a long period of time: over a period of forty years, the parent company gradually accumulated a debt of £ 2 billion due to an unbalanced relationship between production costs and sales of the manufactured car models. Added is the fact that in the course of international economic and financial crisis 2007-2010 2009, car sales in Egypt plummeted by 42% in the first four months of the year,which has certainly affected the liquidity of the company. Expensive inventory costs, which accumulated in the first quarter of 2009 and in the previous quarters, did the rest. In addition, license agreements have expired between NASCO and Turkey's major business partner Tofaş ("Türk Otomobil Fabrikası AŞ") , which has made the problems even more difficult.

In March 2013, Egypt's parliamentary upper house decided to place the company under the Egyptian Ministry of Military Production. Earlier, the minister responsible for military production, Reda Mahmud Hafez , was commissioned with the economic efficiencya resumption of vehicle production at El Nasr. On April 8, 2013, the minister told the newspaper Al Ahram that the economic studies had been completed. The amount deposited with the bank, which would pay the 234 company employees, now amounts to less than nineteen million Egyptian pounds, which would only be enough to pay out salaries for less than six months. He explained that the suppliers were ready; The machinery had to be overhauled and the workers re-trained. In 1971, the annual production amounted to 7400 vehicles and 1981 to 17,000 vehicles. 2000 emerged 7919 vehicles, the following year 8445, 2002 7336 and 2003 6200 vehicles.