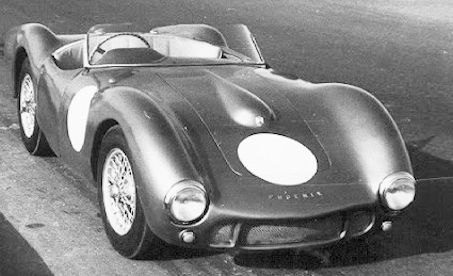 The Cairo Motor Co Ltd. was a dealer for various brands as well as an automobile manufacturer in Egypt .

The company was in 1908  founded by Edmund Flower and initially sold brands such as Rover and Napier . Shortly thereafter Flower received a concession from Ford for Egypt, Sudan, Palestine, Syria and Cyprus.

Neville and Raymond Flower - the two sons of the company founder - also received the concession of Rolls-Royce and Bentley for the entire Middle East in the late 1940s. As early as 1951, Egypt was the largest export market for Rolls-Royce. At the same time, Cairo Motor assembled CKD kits from Austin and Morris models. Between 1954 and 1956 independent vehicles were manufactured and marketed as Phoenix .

Through his motorsport activities Raymond Flower had met in London Gordon Bedson, who designed for Flower a tubular frame chassis, from which a small sports car was created with a handcrafted body. From this model - called Phoenix Flamebird - either about a dozen  produced and sold.

In addition, Bedson designed a two-seater, the Phoenix 2SR6 (sometimes called SR150 ) was called. When the engine was decided on a 2-liter engine. The 1955 mounted in Alexandria vehicle was to start in 1956 in Le Mans, which it did not come because of the political circumstances.

Because of the Suez crisis, the family Flower had to leave Egypt. Raymond Flower continued his business in British exile. Together with the engineer Henry Meadows he developed the Frisky  in 1958.