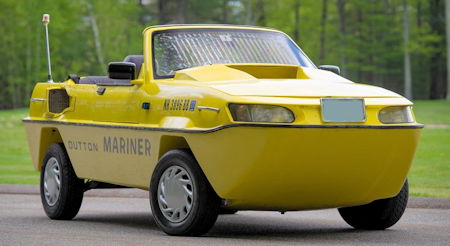 The Dutton Mariner is a Amphibious Car built by Tim Dutton.

With 5 seats and 2 doors, with a double bulkhead. offering a second layer of protection .The whole car can be full of water and it'll still float. It's the 90s equivalent of the famous Triumph Herald Amphicar. But progress has been made. Where the Amphicar was of rustable steel the Mariner is solid glass fibre other parts exposed to water are coated with a corrosion resistant polymer.

With a 5-speed manual gearbox a 120mph claimed performance on land.  Drive down the slipway in first gear and, once in the water, put the gearlever in neutral and engage the hydraulic jet drive by a simple dog clutch control.Clutch is a simple fowvard/reverse lever and the steering wheel does the same job as on land. In the Ampihicar the front wheels served as rudders but the Mariner's steering is also connected to the jet nozzle. giving more precise control and very tight turning circle.
Cost from £12,868 Built with suzuki jimny or Ford Fiesta (MK3) If you don't want a factory-built Mariner, Tim Dutton reckons one Can be assembled using normal hand tools and a suitable donor vehicle for just over £6.000.