Automotive manufacturer of Auburn, Indiana, United States from 1920 to 1937.

Duesenberg Motors Company (sometimes referred to as "Duesy") was an American manufacturer of race cars and luxury automobiles. It was founded by brothers August and Frederick Duesenberg in 1913 in Saint Paul, Minnesota, where they built engines and race cars. The brothers moved their operations to Elizabeth, New Jersey in 1916 to manufacture engines for World War I. In 1919, when their government contracts were cancelled, they moved to Indianapolis, Indiana, home of the Indianapolis Motor Speedway, and established the Duesenberg Automobile and Motors Company, Inc. (Delaware). In late 1926, E.L. Cord added Duesenberg to his Auburn Automobile Company. With the market for expensive luxury cars severely undercut by the Depression, Duesenberg folded in 1937.

In 1913, brothers Fred and Augie Duesenberg founded Duesenberg Motors Company, Inc. on University Avenue in St. Paul, Minnesota, to build engines and race cars. The brothers were self-taught engineers and built many experimental cars. Duesenberg cars were considered some of the best cars of the time, and were built entirely by hand. In 1914, Eddie Rickenbacker drove a "Duesy" to finish in 10th place at the Indianapolis 500, and Duesenberg won the race in 1924, 1925, and 1927. The fledgling company sidestepped into aviation engine manufacturing when Colonel R.C. Bolling and his commission acquired a license to produce the Bugatti U-16 for the U.S. Army Air Service. The end of World War I stopped this project before it could ever mature.

In 1921, Duesenberg provided the pace car for the Indy 500, driven by Fred Duesenberg. In 1923, Jimmy Murphy became the first American to win the French Grand Prix when he drove a Duesenberg to victory at Le Mans.

At the end of World War I, they ceased building aviation and marine engines in Elizabeth, New Jersey at the corner of Newark Avenue and North Avenue. In 1919 the Duesenberg brothers sold their Minnesota and New Jersey factories to John Willys and moved to a new headquarters and factory in Indianapolis, where the "Duesenberg Automobile and Motors Company, Inc." was established in 1920 to begin production of passenger cars. The plant was located on a 17-acre (69,000 m2) site on West Washington street at Harding street until 1937, adjacent to the Overland Automobile factory.

Although the Duesenberg brothers were world-class engineers, they were neither good businessmen nor administrators; they were unable to sell all the units of their first passenger car, the Model A. This had the Duesenberg Straight-8 engine, the first "mass-produced" straight eight engine in the U.S. It was an extremely advanced and expensive automobile (prices began at $6,500), offering features such as single overhead camshafts, four-valve cylinder heads, and the first four-wheel (16") hydraulic brakes (designed by Fred in conjunction with Lockheed)offered on a passenger car anywhere (predating Adler's introduction to the European market in 1926 on the "Standard 6"). The Model A was a lighter and smaller vehicle than the competition. It was among the most powerful and the fastest cars of its time. Among the celebrities who purchased this model were Tom Mix and Rudolph Valentino. 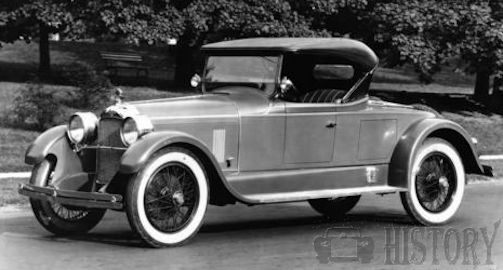 The model experienced various delays going from prototype to production. Deliveries to dealers did not start until December 1921. Sales lagged and the goal of building 100 Duesenbergs each month proved far too high, as the Indianapolis plant struggled to roll out one a day. In 1922 no more than 150 cars were manufactured, and only 650 Model As were sold over a period of six years.

Winning races did not translate into financial success either, although that winning reputation would eventually attract new investors, who supplied the cash flow to prop up the production facility. The brothers continued to create excellent engines for cars, boats, and a few planes but only as employees of various capitalist investors who bought the rights to their famous family name.

The firm had already acquired a considerable aura of prestige when in October 1919, Fred signed over the rights to his name, patents and drawings for a passenger car to a pair of promoters, Newton E. Van Zandt and Luther M. Rankin.On March 8, 1920, these men became president and vice president of the "Duesenberg Automobile and Motors Corporation of Indianapolis". Fred was chief engineer and Augie his assistant, and both were salaried as employees.

Van Zandt quit after a year, and business went from bad to worse in 1923. In 1924 the company went into receivership, but somehow it survived that year. In 1925, the firm's name was changed to "Duesenberg Motors Corporation" and Fred assumed the title of president. Fred and August struggled to keep the company, but to no avail, as they weren't able to raise enough capital.

After Cord's takeover, the new company was renamed "Duesenberg, Inc." Fred would continue in the new organization, now with the title of vice president in charge of engineering and experimental work. Whereas Augie had played an important role in the development of the Model A and its variant, the very rare X, he had nothing to do with the J and had no formal connection with Duesenberg, Inc. until later. According to the expert Marshall Merkes, "Cord did not want Augie around." However, all Duesenberg racing cars produced after 1926 were Augie-built in an enterprise that functioned separately, and in a building apart from the main Duesenberg plant. He was also responsible for a number of engineering achievements like the superchargers he developed for both the Auburn and Cord motorcars.

The newly revived Duesenberg company set about to produce the Model J, which debuted December 1 at the New York Car Show of 1928. In Europe, it was launched at the "Salon de l'automobile de Paris" of 1929. The first and — at the time of the New York presentation — only example made of the series, the J-101, was a sweep-panel, dual-cowl phaeton, with coachwork by LeBaron, finished in silver and black. By the time the Great Depression hit in October 1929, the Duesenberg Company had only built some 200 cars. An additional 100 orders were filled in 1930. Thus, the Model J fell short of the original goal to sell 500 cars a year.

As was the custom among the luxury car brands, only the chassis and engine were displayed, since the interior and body of the car would be coachbuilt to the owner's specifications. The chassis on most Model Js were the same, as was the styling of such elements as fenders, headlamps, radiator, hood and instrument panel.

Duesenberg bodies came from both the United States and Europe, and the finished cars were some of the largest, grandest, most beautiful, and most elegant cars ever created. About half the Model Js built by Duesenberg had coachworks devised by the company's chief body designer, Gordon Buehrig. The rest were by independent coachbuilders from the United States, such as Derham, Holbrook, Judkins, Le Baron, Murphy, Rollston (later renamed Rollson), Walker, Weymann, and Willoughby, and from European works Fernandez et Darrin, Franay, Gurney Nutting, Saoutchik, etc. However, other coachworks were made by Duesenberg branches in Chicago, New York City, Los Angeles, Philadelphia, Florida and Denver, as well as by smaller dealers. For the in-house bodies Duesenberg used the name of La Grande.

There was a gradual evolution (up to the 1937 model) to preserve the "stately lines" while moving into a more integrated mode of styling. The final evolution of the Duesenberg engine was ram-air intakes, which were added to some of the last supercharged models to produce 400 hp (298 kW), referred to as "SSJ". Of 481 Model Js built (including all its versions) produced between 1928 and 1937, about 378 survive.

Duesenberg ceased production in 1937 after Cord's financial empire collapsed. However, between 1937 and 1940 two automobiles put the final touch to this historic marque. The first one was delivered by the coachbuilder Rollson to the German artist Rudolf Bauer in April 1940; it is both the longest Duesenberg and the last one delivered. The last one ever made was assembled from leftover parts between 1938 and 1940.

Duesenberg became far less popular during World War II, by the end of which a few Model Js were advertised for around $300 to $400, with some ultimately selling for only $100 or $200. Business rebounded in the 1950s, when classic and vintage cars became popular among collectors. Several Model Js were advertised in the New York Times in the fall of 1950, at prices as low as $500. By 1959 a decent example could not be bought for less than $4,000, and an exceptional example could approach $10,000. By 1969, model J's were selling anywhere between $15,000 and $50,000. The first Duesenberg to break six figures was a model J that sold for $205,000 in April 1974. The first Duesenberg to sell in excess of $1 Million was in 1985. Today, model J's go for anywhere from mid six figures to well into seven figures. One particular example sold for $10 million recently.

A distinctive feature of the Duesenberg Model J was the "bowtie" style front bumper, which used two pieces of steel, with the top piece bent to resemble a bowtie.

After World War II, August Duesenberg tried to revive the Duesenberg name but was unsuccessful; several later attempts were also unsuccessful. The closest came in the mid-1960s with Fritz (August's son) at the helm and Virgil Exner as the stylist using the chassis of a 1966 Imperial and a Chrysler engine. One of Exner's Duesenberg designs was later produced as a replicar Stutz Bearcat.

A 1970s Duesenberg was also created, based on a contemporary Cadillac Fleetwood and with modern styling. Its production was a limited run.