The Dodge Rampage was offered by the US automaker Dodge from 1981 to 1984 small pickup on a car basis.

For the 1982 model year, Dodge launched this small pickup on the extended platform of the Dodge Omni 024 . The term Rampage should be reminiscent of the brand's robust large pick-up and SUV models, traditionally marketed under the name Dodge Ram . 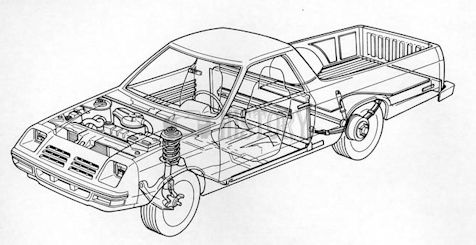 The Rampage was powered by a 2.2-liter inline four-cylinder with 97 hp, which helped the about 1090 kg heavy vehicle that could take 520 kg payload, to proper driving performance. The body of the Rampage came up to the B-pillar from the Dodge Omni 024 and from model year 1983 by its successor Dodge Charger ..

In 1983, the Rampage received a five-speed gearbox, previously a four-speed unit was standard. After the model year 1984, production was discontinued.