In  2006 the Dodge Nitro was launched. While it was available in North America exclusively with the two gasoline engines, in Europe, a diesel engine was offered by the Italian VM Motori . As standard, all models have rear-wheel drive , optionally the Nitro could also be equipped with shiftable four- wheel drive . Power is transmitted to the 3.7-liter V6 engine via a four-speed automatic transmission and the 4.0-liter V6 via a five-speed automatic transmission from Mercedes-Benz. The diesel, however, was equipped with a manual six-speed gearboxdelivered, the five-speed automatic was optional.

The Nitro shared a platform with the Jeep Cherokee Liberty (KK) and was produced in Toledo (Ohio) .The Nitro is 11.10 meters, and it has seating capacity for five people. A special feature of the Nitro is its extendable cargo area of ​​the trunk . This can be pulled out about 50 cm and is intended to facilitate the loading of the vehicle.

For 2010, there was a facelift of the model, in which the chrome parts on the vehicle front were replaced almost completely by those in body color. 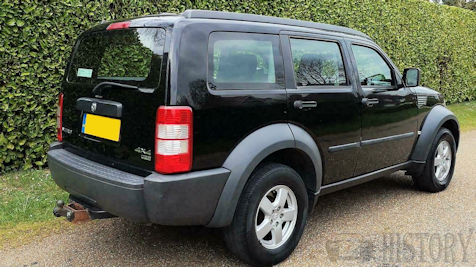