The Dodge La Femme was a Custom Royal series passenger car that Dodge offered in 1955 and 1956 model years. The existence of La Femme was due to the recognition of the Chrysler marketing department that women became more and more interested in cars in the 1950s and that women got more involved in the color of a couple's new car. The La Femme was an attempt to get a foot in the door to the automobile market for women.

The concept of the vehicle was based on two Chrysler showcars ​​of the 1954 model year. They were called Le Comte and La Comtesse , based on the Chrysler Newport hardtop and had clear plastic roofs over the entire passenger compartment. Le Comte was decorated in masculine colors, La Comtesse was painted in "dust pink" and "dove gray" to transport the feminine features. The positive reaction encouraged Chrysler in pursuing the La Comtesse concept.

This concept was passed on to Dodge and got the name La Femme . The first car in this series was a 1955 Dodge Custom Royal Lancer Hardtop in "Sapphire White" and "Heiderosa". From there, the exterior of the vehicles was provided with a special, golden lettering La Femme instead of the usual designation Custom Royal Lancer on the front fenders.

The interior has also been redesigned and better equipped. The seats were upholstered in special fabric with pink rose petals on a pale pink background. The door panels were made of pale pink vinyl. At La Femme there was also a rectangular handbag, which harmonized with the interior colors. It could be stowed in a special tray at the back of the passenger seat. Each bag was provided with a make-up kit consisting of a lipstick container, cigarette case, lighter and purse, designed and manufactured by Evans. At the back of the driver's seat was a tray with a raincoat, rain hat and umbrella that matched the rose flower decor in the interior. The leaflets mentioned that La Femme had been made extra "for Her Majesty ... the American Woman".

In model year 1956, La Femme returned with no less theatrical thunder: the dealers received letters from the marketing department, in which La Femme was described as an "amazing success". This year Dodge replaced the colors Heiderosa and Sapphire White with "hazy orchid" and "royal orchid". The interior of the 1956 model was not inspired by that of the 1955 model, but had specially designed only for La Femme seat patterns, interior colors and carpets. The shelves behind the front seats were also changed in 1956 to accommodate the raincoat, the rain hat and the umbrella, which were delivered with the car.

At the end of the model year 1956 Dodge hired La Femme and shelved the concept. Since the La Femme was just an optional package for $ 143, its production figures were never recorded separately from the other Dodge models. But it is believed that about 1500 vehicles in 1955 and about 1000 vehicles were created in 1956. 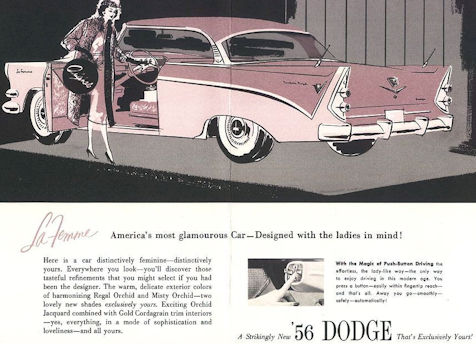