A coupe model called the GTS was introduced in 1996. Dubbed "double bubble", the roof featured slightly raised sections above each seat to accommodate usage of helmets, a throwback to its intended purpose. Vipers can be seen participating often in drag racing and road racing. The GTS, like its predecessor, was chosen as the pace car for the 1996 Indianapolis 500.

Despite its similar outward appearance, the car was distinct enough to be considered a new generation model. Extensive modifications included a reworked engine with higher power and less weight, an almost completely redesigned chassis that was made 60 lb (27 kg) lighter and 25% stiffer in torsional rigidity through meticulous computer analysis, a thoroughly redesigned suspension, and reduced braking distances; the 1996 to 2002 Viper GTS had a lighter (approximately 650 lb (290 kg)) 450 bhp (340 kW) engine, which could complete the quarter mile in 12.3 seconds, 0.3 seconds and 16 mph (26 km/h) faster than its predecessor, and increased top speed by 11 mph (18 km/h) or so. The revised suspension, stiffer chassis, and aerodynamic body raised lateral grip to 0.98 g (9.6 m/s²), although other reports show the 1992 model with 1.0 g. Contemporary tires have improved upon this measure significantly. Slalom runs could often reach or exceed 70 mph (110 km/h). Brakes once again lacked ABS initially, and proved to be the car's weakest point. The brakes hurt the car in numerous comparison tests, such as a 1997 "supercar comparison" by Motor Trend, in which the Viper GTS placed at the top against cars such as the Ferrari 355, Chevrolet Corvette, Porsche 911 Turbo, Acura NSX-T, Mitsubishi 3000GT, and the Toyota Supra in all performance exercises except braking. The car not only placed last, but had considerably longer stopping distances than other vehicles. ABS was introduced further into the production run, though braking performance was not necessarily significantly improved. In a Sports Car International comparison conducted in 2002, the Viper ACR (with ABS) was compared to the 911 GT2 at Thunderhill Raceway Park. Both cars were very capable, and quick around the test track, but the Viper proved more difficult to drive, and the braking system was blamed very specifically for the gap in lap times (approximately GT2: 2 minutes, ACR: 2:04) between the two cars.

Along with the updated performance came the inclusion of some of the "luxuries" the car did without before. Dual front airbags were added to the vehicle's safety equipment list in 1996 on the GTS and 1997 on the RT/10 as mandated by the government. The car was also exported to Europe, where it was rebadged as a Chrysler, and sold under this marque from 1997 to 2003. European models had a detuned version of the Viper V10.

In the first six years of production almost 10,000 Vipers were sold. Minor evolutionary changes including new 18" diameter wheels and tires were introduced in the 1999 model. Subsequent versions featured light-weight hypereutectic pistons and an improved exhaust system, side exhaust having been dropped part way through production year 1996 for the RT/10; all production GTS Viper Coupes had rear exit exhaust. 1999 saw the introduction of the Cognac Connolly leather interior package. Continuing the refinements, ABS was introduced in 2001. In 2002, the end of second generation production was celebrated with the release of 360 commemorative "Final Edition" models. These models were painted red with white stripes, paying tribute to the famous race-winning Oreca cars. The RT/10 was replaced by the SRT-10 in 2003 and the GTS was replaced in 2006 by the SRT-10 Coupe. 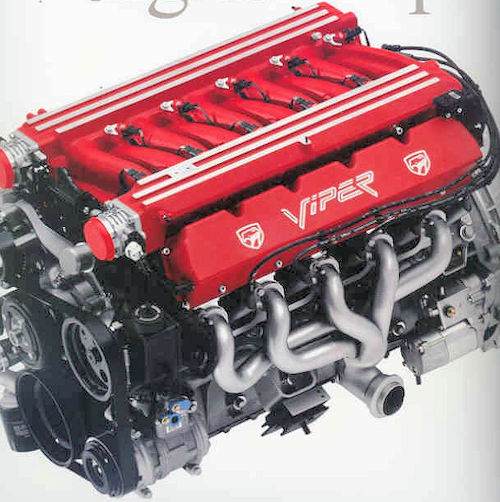