The first prototype was tested in January 1989. It debuted in 1991 with two pre-production models as the pace car for the Indianapolis 500 when Dodge was forced to substitute it in place of the Japanese-built Stealth because of complaints from the United Auto Workers, and went on sale in January 1992 as the RT/10 Roadster. 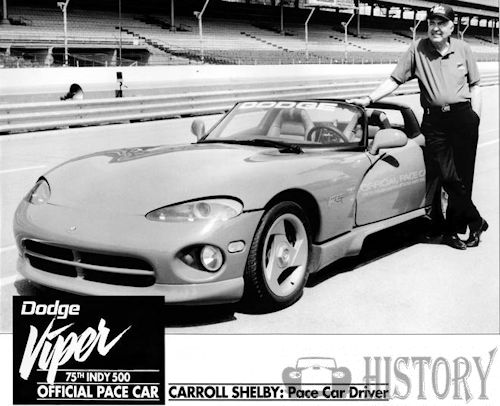 The centerpiece of the car was its engine. It was based on the Chrysler LA design, which was mostly used as a truck engine at the time. The original configuration made it too heavy for sports car use, so Lamborghini, then owned by Chrysler Corporation, revamped Dodge's cast-iron block V10 for the Viper by recasting the block and heads in aluminum alloy. Some within Chrysler felt the pushrod two-valve design, while adequate for the truck application, was unsuitable for a performance car and suggested a more comprehensive redesign which would have included four valves per cylinder. Chrysler, however, was uncertain about the Viper's production costs and sales potential and so declined to provide the budget for the modification.

The engine weighed 711 lb (323 kg) and produced 400 bhp (300 kW) at 4600 rpm and 465 lb·ft (630 N·m) at 3600 rpm, and thanks to the long-gearing allowed by the engine, provided fuel economy at a United States Environmental Protection Agency-rated 12 mpg-US (20 L/100 km; 14 mpg-imp) city and 20 mpg-US (12 L/100 km; 24 mpg-imp) highway. The body was a tubular steel frame with resin transfer molding (RTM) fiberglass panels. Some small bits of the suspension, (tie-rod ends and parts of the front wheel hubs) following the manufacturer's "engine first" mantra, were sourced from the Dodge Dakota pickup. It had a curb weight of 3,284 lb (1,490 kg) and lacked all modern driver aids such as traction control or anti-lock brakes. Car and Driver magazine referred to this generation as "the world's biggest Fat Boy Harley", and likened driving it to "playing ping pong with a Louisville Slugger baseball bat." Despite this, in straight line performance, it completed a quarter mile (402 m) in 12.6 seconds and had a maximum speed of over 150 mph (240 km/h). Its large tires allowed the car to average close to 1 lateral g in corners, placing it among the elite cars of its day. However, the car proved tricky to drive at high speeds, particularly for the unskilled.

The car was spartan, although it featured inflatable lumbar support and adjustable seats. Along with the absence of exterior door handles, the vehicle lacked side windows and a roof. Although a soft top cover was available, it was designed primarily for indoor vehicle storage. Side curtains of fabric and clear plastic operated by zippers could be inserted into the door and hand-bolted when needed. All of these decisions were made to reduce weight. The battery is located in the sealed compartment over the rear wheel well to increase rear-end weight and traction. The car shipped with a tonneau cover and video tape on soft-top assembly (the soft top is removable and folds to fit in the trunk). In 1994 A/C was added as an option.