Where the previous four years' Dodges had been very straight-lined and lean (thanks to the talents of Elwood Engel), the new 1969 Polara wore a broad-shouldered and far more streamlined look. Called the "Fuselage Look", this style would persist through five model years, with subtle variations. The resulting look made these Polaras and Monacos appear much larger than the 1968 and earlier models. 1969 models got front outboard head restraints as required by Federal law.

For 1969 the Polara 500 was reintroduced as a mid-level series between the standard Polara and top-of-the-line Monaco. The Polara 500 was available as either a convertible or hardtop coupe. Available powerplants included 318, 383, and 440 cubic-inch V8 engines, along with a 225 cubic-inch slant-6 I6 engine. 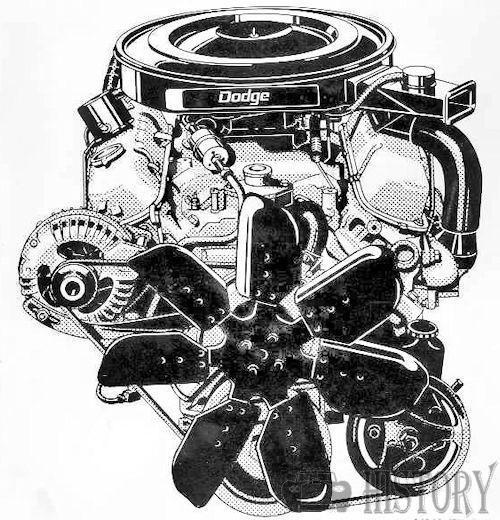 The 1969 Dodge Polara models offered the Super-Lite option, which placed a quartz auxiliary "turnpike beam" headlamp in the driver side grille.

In 1970 the Polara would receive new front and rear styling that included a bumper that wrapped around the grill and headlights. The Polara 500 was replaced by the Polara Custom in hardtop coupe, 4-door hardtop sedan, and conventional 4-door sedan body styles. There was also a stripped-down Polara Special available as either a 4-door sedan or station wagon. 1970 was the last year that the Polara would be available in a convertible body style (with a scant 842 produced, making it extremely rare today), and Dodge would never again offer a full-sized convertible. Also exceptionally rare for 1970 was the "medallion" rear bumper. This bumper featured in all of the sales literature was discontinued after late August or early September 1969 production and replaced with a plain bumper lacking the center Fratzog medallion. Despite the fanfare, Dodge dropped the "Super-Lite" option at the end of the 1970 model year because of lack of consumer interest and various challenges to its legality in certain states. 1970s also received a new locking steering column which locked the steering wheel and column shift lever when the key was removed.

The 1972 model year would see a fairly significant facelift with new sheet metal and the disappearance of the Polara Brougham model. 1973 models received new front-end styling (which resembled the big 1970 Chevrolet), in which they lost the previous wrap-around front bumper.

Sales of the Polara were falling by this time, however. Having been eclipsed by the Monaco, Dodge decided to drop the Polara after 1973. The redesigned 1974 Monaco would only serve for four model years before being replaced by the unsuccessful Dodge St. Regis.

Variants of the North American Dodge Dart — using the same 111 in (2,819.4 mm) wheelbase but different sheet metal) were produced in Argentina from 1968 to 1980 by Chrysler-Fevre Argentina S.A..Sedan models were called Coronado, but the Polara name was applied to coupé models, in conjunction with R/T and GTX designations for special sport coupés. Available engines were the 225 cu in (3.7 L) Slant-6, a 318 cu in (5.2 L) Chrysler V8, and a diesel. The 318 was rarely ordered in Argentina, as local market preferences leaned more towards 4- or 6-cylinder engines. Three- and four-speed manual and 3-speed automatic transmissions were offered. The general impression of these cars, designed exclusively for the Argentine market, are that they look like the 1968 Plymouth Satellite for the sedan and the Dodge Charger–Plymouth Road Runner for the coupé, but they are smaller (although larger than the Dodge Dart). However, the interior, especially the dashboard, are similar to those of the early 70s Dodge Dart–Plymouth Valiant. These coupes were not available in large numbers, but are collected by enthusiasts. They are hard to sell, since gas consumption is high, compared to the 4- and 6-cylinder cars the Argentine consumer is used to. Several restyling jobs of the whole line with new front and rear ends were carried out within its lifetime.

There was also a version of this model built from 1971 to 1978 as a CKD imported from Argentina known as the Dodge 3700 in Spain. A 3700 GT is seen in the first Batman movie directed by Tim Burton.

In Brazil, the Dodge Polara was revived – in name only – in 1977, on a version of the British Chrysler Avenger (which in the early 1970s had been sold in North America as the Plymouth Cricket). They were sold until 1981.