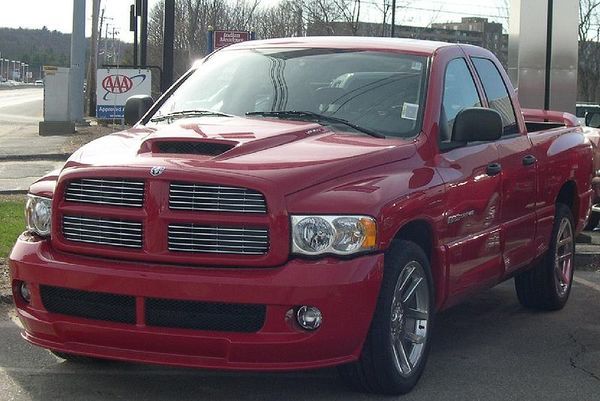 In addition to factory equipment and appearance packages, the Ram pickup has also been offered at times with dealer-installed packages.

Throughout the 1980s, this package was available for the Ram pickup. In the early 80s, a special badge was affixed to the box side of the truck, but this was dropped in the mid-80s. Prospector was a package that usually included a different fuel tank, cloth seat and carpeting. In the late 80s, a light package as well as the large 6x9 mirrors were added to the list of options. This trim package was carried on until the redesign in 1994.

Dodge Ram VTS Concept - This concept from Dodge was meant to be a design study highly inspired by Viper GTS-inspired bumpers, mirrors, 17-inch wheels, Blue Paint, dual white stripes and Viper GTS sourced 415 bhp V10. VTS was vital in the development of 500 bhp Ram SRT10 that were built from 2004 to 2006.

Dodge Ram SRT 10 aka Viper Ram - This is a regular or quad-cab body with the Dodge Viper's V10 engine 8.3L, 22" wheels and Pirelli tires, lowered suspension, bucket seats, body modifications, and a spoiler. The 2004 version was available only in a single cab with a 6-speed manual transmission and a Hurstshifter. For 2005, Dodge released a Quad Cab version of the Viper V10 powered truck with a modified 48RE four-speed automatic transmission from the Ram with the Cummins turbodiesel engine. In 2004, the truck held the Guinness World Record for "World's Fastest Production Pickup Truck" with a speed of154.587 mph (247.3 km/h). This record stood until overtaken by the Australian Holden Special Vehicles Maloo R8 in May 2006. SRT-10 production ended on June 30, 2006.

Power Wagon - This model, introduced for 2005, is an off-road focused version of the Ram. The name is drawn from Dodge's line of 4-wheel-drive trucks made from the early 1940s through the 1980s. It comes with the 5.7 L (345 cu in) Hemi engine, electronic locking differentials, electronic disconnecting front sway bar, 33" off-road tires, handlebar, fender flares, "Power Wagon" nameplates instead of the standard Ram badging, and a 12,000 pound winch.This truck was built on the 2500 platform.

Rumble Bee - The Rumble Bee package was a limited sport-truck version of the Ram. It was available only on regular cab/short-box pickups; however, some other versions of the Ram were modified to look like Rumble Bees. It included lower body cladding, 20" wheels, a hood scoop, and a specially trimmed interior including a serialized number plate. On the rear of the box was a stripe with a "Rumble Bee" emblem, similar to that of the Super Bee. All Rumble Bees were either black with "solar yellow" trim or yellow with black trim.

HemiGTX - The Hemi GTX package was a limited sport-truck version of the Ram. Introduced in 2004 and only made in 2004 and 2005, these were customized by LA West of Indiana as ordered from dealers. It was available on regular cab/short-box and quad cab/short-box and 2x4 and 4x4 model pickups and included a custom overall paint from Mopar's Impact colors from the 1970s (this included Hemi Orange, Plum Crazy Purple, Sublime Green, and Banana Yellow). 20" American Racing Motto chrome wheels, a new cowl "blacked out" hood, and a specially trimmed leather 2-tone interior including a serialized number plate on the drivers side door jamb were offered. On the sides was a "hockey stick" stripe with "HEMI GTX" that extended from the hood to the rear of the box. The air box was also painted to match the body color, and a color matched steering wheel was added as well. They were only 433 produced in 2004 and roughly the same amount in 2005. A certificate of Authencity was given to all original owners.

Daytona - Introduced for 2005, the Ram Daytona was a new sport-truck edition of the Ram. It was available as a 5.7-liter Hemi V8 in Regular or Quad-Cab styles and featured lower body cladding, 20-inch chrome wheels, SRT-10 hood, Borla dual exhaust, serialized number plate, and a tall rear spoiler reminiscent of the 1969 Dodge Charger Daytona. The Daytonas had a black body stripe to match the rear spoiler and came in silver or "Go Mango" paint (a metallic orange color reminiscent of the Dodge's "high impact" colors from the 1960s and 1970s) with matching interior trim. The Dodge Ram Daytona had a 3.92 ratio rear end, the same rear end as the Dodge Ram Rumble Bee. Several exterior items were unique to the Daytona package which made it different than other equipment packages. It was equipped with 20-inch (510 mm) chrome rims and performance tires. Replacing the standard hood was one with a non-functional hood scoop. The most noticeable feature was the large spoiler which was attached at the rear of the cargo box. The 11-inch (280 mm) spoiler lined up with the flat black stripe that ran along the back of the bed side with the word 'Daytona' written in the middle. This spoiler was reminiscient of the 1969 Dodge Charger Daytona.

Express - The Express is a Dodge Ram 1500 that offered special badges, 20" tires and wheels from the Dodge

Spirit Of '76 - A special package available in 1976 to celebrate America's Bicentennial. It came with a special decal that ran down the side of the truck and cloth or vinyl interior.

Limited Edition Indy Pace and SS/T pkg - The Dodge Ram Indy Pace Truck was available in 1996. It included longitudinal stripes similar to those on the Dodge Viper along with an optional door sticker stating "Official Truck of the 80th Indianapolis 500". These trucks had a 5.9 L (360 cu in) engine with upgraded exhaust and 15 hp (11 kW) more power. These also included 17-inch (430 mm) wheels with Goodyear Eagle II tires, size 275/60R-17. The SS/T (Super Sport Truck) version was available from 1997 to 1998 and included all the same upgrades except the door sticker. The SS/T also had "SS/T" designed into the stripe on both the hood and tailgate. The Indy Trucks were available only in blue with white stripes. The SS/Ts were available in white/blue, red/silver, black/silver, and green/silver. All include a specialty sticker on the inner door stating, "Built with pride in the U.S.A." A real Pace truck is a metal plate on the driver's side frame rail, with a raised number 19 on it. However, the SS/Ts do not have this.

Dodge Ram R/T - It is a concept truck with a blue body, 22-inch forged wheels, SRT stripes, and a new front bumper with chin spoiler. It was unveiled in 2008 at the SEMA show.Production of the Dodge Ram R/T began for the 2009 model year. It is a regular cab, short bed, 2WD 1500 Ram with 22" wheels, a 4.10 final drive gear ratio (the only way to get a 4.10 rear in a 1500), an R/T badge in the lower-right corner of the grille, and a Hemi. It also has the performance hood from the Sport Appearance Package on other Ram Sport models, but does not have the striping package that the concept had.

Contractor's Special hybrid - Dodge announced a hybrid version of the Ram, dubbed the Contractor's Special, in 2003. However, the schedule for delivery slipped as Dodge backed away from the vehicle. The hybrid Ram was available only for fleet purchasers (if at all) and did not enter mass production. It offered an AC electrical outlet panel for running an entire job site worth of power tools, but the through-the-road method of balancing the gas engine and electric motor reportedly did not work as desired. Dodge has announced that it would use a hybrid transmission developed jointly with General Motors and BMW.

2014 Ram 1500 Urban Concept - The 2014 Ram 1500 Urban Concept features a 6.4L Hemi V8 sporting 470 horsepower and 470 ft-lb of torque. The engine comes from the Dodge Challenger SRT8 which is paired with a 5-speed automatic W5A580 transmission or a 6-speed manual Tremec TR6060 transmission. The concept features a regular cab painted in dark blue clear coat with an off-center light blue stripe. It sits on 22-inch wheels painted hyperblack. No word on if this engine will be available on either the 2500 or 3500.