Initially, in 1929, very few Typ 4=8s were produced, but volumes built up as the DKW Typ P and its sporting derivative was phased out, and between 1929 and 1940 approximately 24,000 Typ 4=8s were manufactured. The figure is dwarfed by the approximately 218,000 smaller DKW F1 and its successors produced at Zwickau between 1931 and 1942, and in retrospect the Typ 4=8 tends to be overlooked when compared to its front wheel drive sibling; but it was nevertheless in the 1930s a significant participant in the growing German auto-market.

The DKW Typ 4=8 underwent several name changes and step by step modifications before production ended, in 1940, of what was by now the 1054cc DKW Sonderklasse, but the V4 two stroke engine and market positioning remained consistent throughout. 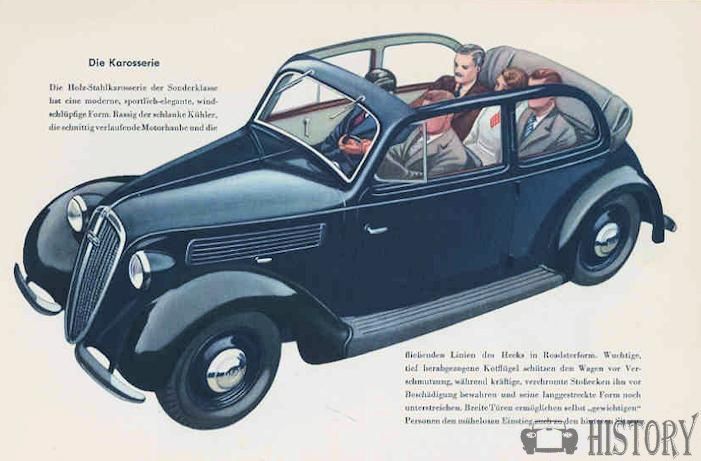 The name “Schwebeklasse” which was used for models produced between 1934 and 1937 apparently referred to the cars “floating” axel, a component of the suspension system which was advertised as providing superior handling. (“Schweben” is a German verb for “to float”.)

The car launched in 1929 had a 4 cylinder V4 engine of 980cc mounted at the front and fed by two fuel pumps. Power, maximum output of which was claimed at 25PS, was transmitted to the rear wheels via a 3-speed manual transmission controlled from a lever in the middle of the floor. The wheels were attached to rigid axles each suspended on a traditional transverse leaf spring.

Like its smaller predecessor the car came with a timber frame body coated with synthetic leather. At this stage the only body offered was a two door four seater “limousine” sedan/saloon with a perpendicular style characteristic of the period.

It had been hoped that the reconfigured fuel feed arrangement and the use of four smaller cylinders in place of two larger ones would address the problem of high fuel consumption and the need for frequent spark-plug replacement which had been a feature of the manufacturer’s first car, the predecessor of the Typ 4=8. When it became clear that fuel and spark-plug consumption were still excessive, a replacement model was introduced in 1930, the DKW V 800 4=8. This had a smaller 782cc engine and only 20 PS of claimed power. The performance of the car was reduced, but not the fuel consumption. The engine tended to overheat, even in cold weather, and could become very jerky in operation.

The car was now offered either as a two door “cabrio-limousine” (a soft topped four seater with fixed side windows) or as a “full” two seater cabriolet.

In 1931 engine capacity was increased again, now to 990cc, and claimed power returned to 25 PS. The name changed to DKW 4=8 Typ V 1000 . The 990cc engine specification that continued to be included through several successive model upgrades, although changes to compression ratios and the increase in production and sales levels suggest that detailed work continued in order to address the more acute engine problems reported on the early cars. 1931 was also the year that the mechanically operated brake system was replaced by a hydraulically controlled one.

The timber framed body was now available as a four seater “limousine” (sedan/saloon), a soft-topped four seater “cabrio-limousine” or as a “full” two seater cabriolet, all three body types supplied with two doors and all three offered at the same manufacturer’s published retail price of 3,300 Marks.

An interim replacement in 1932 was primarily distinguished by reshaped front wheel arches and slightly more stylish bodywork at the front. The car also acquired a new name and a new gear box. The DKW Sonderklasse Typ 432 was still powered by the now familiar 990cc 2-stroke V4 engine and the gear lever was still in the middle of the floor, but now the driver had a choice from four forward gear ratios rather than three.

Later in 1932, in October, the car appeared with a further lengthened wheel base and claimed power from the 990cc engine increased from 25 PS at 3,200 rpm to 26 PS at 3,500 rpm. The name was modified to DKW 1001 Sonderklasse and the rear suspension was redesigned, now featuring a “floating axle”  suspended from a high level laterally mounted leaf spring.

The wheelbase was again lengthened, this time from 2,760 mm (109 in) to 2,850 mm (112 in), with corresponding increases in overall body length. Once again customers could choose between a four seater “limousine” (sedan/saloon), a soft-topped four seater “cabrio-limousine” or a “full” (two seater) cabriolet, all three body types supplied with two doors and all three offered at the same manufacturer’s published retail price down to 3,000 Marks, reflecting the currency deflation affecting many European economies in the mid-1930s.

The increased wheelbase enabled the manufacturer to provide more elegant bodies, with longer wings over the wheels and more elegantly raked rears, but the body was found to be less durable than that of the previous model. The traditional timber frame construction seemed to be reaching the frontiers of its structural possibilities, and the cars tended to flex on bumpy roads or even, in the case of a few older cars, to come apart in the middle.

1934 saw the arrival of a new model, still powered by the familiar 990cc engine and using the gearbox and underpinnings of the previous model, but the “floating axle” for the rear wheels was now joined by a second “floating” axle, suspended from a high level transversely mounted leaf spring, for the front wheels. The new suspension was said to confer superior handling, and DKW celebrated with another name change for the car which now became the DKW Schwebeklasse

In July 1935 the engine was bored out slightly further than before. Engine capacity now increased to 1054cc and claimed power output to 32 PS. This was not a “completely new engine”, however: the stroke length of 68.5 mm remained unchanged as did the 2-stroke 4-cylinder configuration. The Solex FH 26 S carburettor had been replaced in 1934, during the previous car’s production run, with twin Solex 26 BFH carburetters, and this new fuel feed arrangement was retained with the larger engine that arrived in 1935.

The Schwebeklasse came with a strikingly more streamlined silhouette than its predecessor, with longer front and rear overhangs. Timber frame construction was at this stage retained, but there was no further increase in the wheelbase length, and the body was more rigid than that of the earlier model, though durability remained an issue.The choice of bodies was now between a four seater “limousine” (sedan/saloon) and a soft-topped four seater “cabrio-limousine”: a two seater cabriolet was no longer offered.

The name DKW Sonderklasse returned in 1937. The engine and suspension were unchanged from those on the previous year’s car. Keen-eyed buyers might have spotted the reduction in brake-drum diameters on all four wheels from 250mm to 225mm.

The big news for 1937 was an all new steel body. This put an end to concerns that had arisen since 1932 when the timber frame bodies had gained a reputation for distorting or even snapping as the manufacturer introduced modified bodies with successively lengthened wheel-bases. The new body, which DKW celebrated with a return to the DKW Sonderklasse name, was in fact shared with the Wanderer W24 from DKW’s fellow member of the Auto Union. In this form the Sonderklasse continued to be produced in useful volumes and without further significant changes until 1940.