The DKW F8 compact front-wheel drive two-stroke engined saloon was introduced by in 1939. The F8 was slightly shorter than its predecessor despite having a marginally increased wheelbase. The base model, known as the Reichsklasse, was manufactured only till 1940 but the Meisterklasse sedan continued in production till 1942. In addition to the saloons, cabriolet (saloon and coupé) versions were offered.

The "F" in the car's name stood for "Front" which referred to its front wheel drive configuration. Although in retrospect it is almost always identified as the "F8" which distinguishes it from the "F7" which preceded it and from the "F9" which was intended to replace it, the manufacturer's publicity material from 1939 calls it simply the "DKW Front".

After the war the car reappeared in 1949 as the IFA F8, from the Zwickau plant which now operated under Soviet control. The factory and operation was reorganized as a Volkseigener Betrieb (or "People Owned Enterprise") Automobilwerke Zwickau (AWZ). The F8 continued in production at Zwickau until approximately 1955: in addition to the sedan and cabriolet bodies, various additional body types available post war included a delivery van and estate variant.

The base ‘Reichsklasse’ model had the two-stroke twin-cylinder engine from its predecessor, but fractionally bored out. Engine capacity was now 589 cc. Claimed output and top speed were as before at and 18 bhp (13.2 kW) and 80 km/h (50 mph).

The ‘Meisterklasse’’ version of the DKW F8 also inherited its predecessor’s similarly configured engine of 692 cc. For this engine 20 bhp (14.7 kW) was claimed with a top speed of 85 km/h (53 mph). It was this larger engine that reappeared in the IFA F8 in 1949.

Power was delivered to the front wheels by means of a three-speed manual gear box with a lockable freewheel mechanism on all three ratios. The engine was started using a Dynastart device, which was a combination self-starter / alternator. 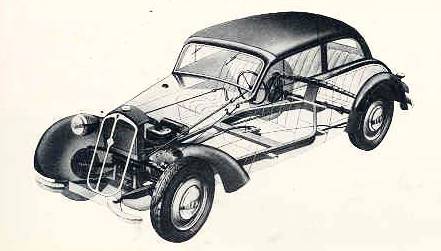 The body was mounted on a box frame chassis which facilitated the fitting of different body options, such as the light vans and trucks produced during the IFA period. The outer skin of the car comprised a combination of steel panels and, for the central portion, fabric covered timber frame bodywork. After 1953 key panels were made from duroplast, reducing the weight of the car and anticipating the light weight technologies that would be applied to Trabant construction.

The Swiss coachbuilding firm of Holka produced their own bodies for the imported F8 chassis. Importations of F8 chassis began in 1939, and continued till 1944 (despite production having ceased in 1942) in small numbers. In 1944, Holka even designed and produced (in very small quantities) their own version of a cabriolet, formerly imported. The final Holka-bodied car was finished in January 1945.

The F8 had replaced the DKW F7 after only a two year model life. The small DKWs were among the best selling small cars in Germany during the 1930s, and regular model replacement was part of Auto Union's successful marketing strategy. It seems that the F8 was itself scheduled for relatively rapid replacement by the steel bodied DKW F9. War intervened, however, and production of the Reichsklasse and Cabriolet was ended in 1940. Production of the Meisterklasse continued till 1942. By 1942, when passenger car production at Zwickau was ended, approximately 50,000 F8s had been produced. Sales of new F8 cars and chassis continued until 1944, and the Swiss coachbuilding firm of Holka was still bodying new F8 chassis during 1943 and 1944. That firm even introduced a new cabriolet in 1944, though only a small number were produced. Directly after the war it took some time for DKW production to resume, but prewar F8s did soon appear on German roads: the car had been a big seller before the war and military personnel during the first half of the 1940s had found the modest dimensions and performance of the F8 relatively unappealing.

At the 1947 Leipzig Fair the car reappeared, badged now as the DKW-IFA F8. Production of the eastern IFA F8 recommenced in or before 1949 at the Auto Union's Zwickau factory which was in the Soviet occupied zone of Germany and was expropriated to become the Volkseigener Betrieb (or "People Owned Enterprise") Automobilwerke Zwickau (AWZ).

It is believed that by 1955 a further 26,267 of the cars had been built as IFA F8s. Under an "inter-zone" trade agreement concluded in 1950/51 approximately 1,000 of the cars were exported to what had by now de facto become the separate country of West Germany. A wider range of body options included an estate and light commercial variants. In 1954 a Cabriolet deluxe was introduced, intended primarily as an export special for the western market. After the IFA brand had been phased out, the final F8s were evidently badged as Wartburgs. The two-cylinder 700 cc two-stroke engine lived on in the iconic Trabant.