The original DeLorean Motor Company (DMC) is an automobile manufacturer formed by automobile industry executive John DeLorean in 1975. It is remembered for the one model it produced—the distinctive stainless steel DeLorean DMC-12 sports car featuring gull-wing doors—and for its brief and turbulent history, ending in receivership and bankruptcy in 1982. Near the end, in a desperate attempt to raise the funds his company needed to survive, John DeLorean was filmed appearing to accept money to take part in drug trafficking, but was subsequently acquitted of charges brought against him on the basis of entrapment.

The DeLorean DMC-12 shot to worldwide fame in the Back to the Future movie trilogy as the car made into a time machine by eccentric scientist Doctor Emmett L. Brown, although the company had ceased to exist before the first movie was made.

In 1995, Liverpool-born mechanic Stephen Wynne started a separate company using the "DeLorean Motor Company" name and shortly thereafter acquired the remaining parts inventory and the stylized "DMC" logo trademark of DeLorean Motor Company.The current DeLorean Motor Company located near Houston is not, and has never been, associated with the original company but supports owners of DeLorean cars. DMC (Texas), as they are known, has an additional five authorized, franchised dealers in Bonita Springs, Florida; Crystal Lake, Illinois; Garden Grove, California; Bellevue, Washington and Hem, The Netherlands.

John DeLorean founded the DeLorean Motor Company in Detroit, Michigan on October 24, 1975. He was already well known in the automobile industry as a capable engineer, business innovator, and youngest person to become a General Motors (GM) executive. Investment capital came primarily in the form of business loans from the Bank of America and from the formation of partnerships and private investment from select parties, including The Tonight Show host Johnny Carson and entertainers Roy Clark and Sammy Davis, Jr.. Money was also gained later through a dealer investment program in which those dealerships offering DeLorean's cars for sale were made shareholders in the company.

DeLorean also sought lucrative incentives from various government and economic organizations to pay for constructing the company's automobile manufacturing facilities. To gain these, he looked to build his first factory in a country or area where unemployment was particularly high. One candidate was the Republic of Ireland, although the country's then Minister for Industry and Commerce, Desmond O'Malley, decided not to support the project. A deal in Puerto Rico was about to be agreed when DeLorean took up a last-minute offer from the UK Northern Ireland's Industrial Development Board. Besides taking some early seed capital from Hollywood stars Sammy Davis Jr. and Johnny Carson, DeLorean Motor Company relied on the British government for about $120 million of its $200 million startup costs according to the Times. The British government was very keen to create jobs in Northern Ireland to reduce sectarian violence by reducing unemployment. As part of this offer, DeLorean was apparently under the impression that the British government would provide his company with Export Credit financing. This would provide a loan of 80% of the wholesale cost of the vehicles (US$20,000) upon completion and delivery for shipping.

In October 1978, construction of the 6-building, 660,000 ft² (61,000 m²) manufacturing plant began in Northern Ireland and was completed in 16 months by Farrans McLaughlin & Harvey. Officially known as DMCL (DeLorean Motor Cars, Ltd.), the facility was located in Dunmurry, a suburb of Belfast. It was situated on an interface between two communities with differing religious predominations: Catholic Twinbrook and ProtestantDunmurry

Unit production was scheduled to begin in 1979, but engineering delays and budget overruns caused the assembly lines to start only in early 1981. Workers at the factory were generally inexperienced; many never had jobs before joining DMC. This may have contributed to the reported quality issues attributed to the early production vehicles and the subsequent establishment of Quality Assurance Centers (QAC) located at various delivery locations. QACs were set up in California, New Jersey and Michigan where some of the quality issues were to be addressed and resolved before delivery to dealerships. Some of the issues related to the fitting of body panels, higher-output alternators, and gullwing door adjustments.

The combined efforts of quality assurance improvements at the factory and the post-production quality assurance done at the QACs were generally successful, although workmanship complaints would still occasionally arise; the 1981 DeLoreans were delivered with a 12-month, 12,000 mi (19,000 km) warranty. By 1982, improvements in components and the more experienced workforce meant that production quality was vastly improved. Disputes between dealerships and customers arose later because many dealerships refused to do warranty work because they were not reimbursed. 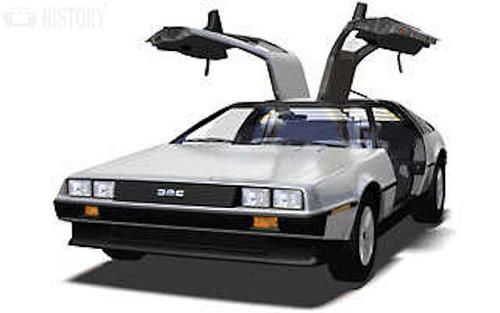 Reception by the car buying public and automotive magazines was mixed. Although the early vehicles had impressive waiting lists of anxious consumers, the MSRP sticker price of $25,000 ($57,500 in 2008 dollars)was cost-prohibitive for the majority of the market — especially for what many considered to be an under-powered and impractical plaything. "It's not a barn burner," observed Road & Track, "(with) a 0-60 mph time of 10.5 seconds. Frankly, that's not quick for a sports/GT car in this price category." The stainless steel body panels were an attractive design concept and impervious to corrosion, but in practice the sheen surface tended to show fingerprints. It also meant that the car could not be easily painted; every factory original DeLorean looked virtually identical. Some dealerships painted their cars on delivery to help make theirs more distinctive. DMC was testing the use of translucent paint to help provide different color options on the cars while also allowing the stainless steel grain to show through, but no cars were sold with factory painted body panels. The only factory option initially available was an automatic transmission. A grey interior was offered later in 1981 as an alternative to the standard black interior. Several accessories including pinstriping and luggage racks helped provide further individuality.

In 1981, it was reported there were plans to have made a 4-door version of the car (perhaps on a longer wheelbase) for 1983. It was to have been of stainless steel, and with gullwing doors.

The lack of demand, cost overruns, and unfavorable exchange rates began to take their toll on DMC's cash flow in late 1981. The company had estimated their break-even point to be between 10,000 and 12,000 units, but sales were only around 6,000. In response to the income shortfall, a restructuring plan was devised where a new "DeLorean Motors Holding Company" would be formed, which in turn would have become corporate parent to DMC and each of its subsidiaries: DeLorean Motor Cars Limited (manufacturer), DeLorean Motor Cars of America (distributor in the U.S.) and DeLorean Research Partnership (a research and development company). In January 1982, due to United States Securities and Exchange Commission questions about the company's viability, the company was forced to cancel the stock issue for the holding company that DeLorean had hoped would raise about $27 million.

John DeLorean then lobbied the British government for aid, but was refused unless he was able to find a matching amount from other investors. What followed is a matter of debate between the British government, the US Federal Bureau of Investigation, the Drug Enforcement Administration, DeLorean, his investors, and the US court system. At some point in 1982, John DeLorean became the target of an FBI sting operation designed to arrest drug traffickers. He was arrested in October 1982 and charged with conspiring to smuggle $24 million worth of cocaine into the US. The key element of evidence for the prosecution was a videotape showing DeLorean discussing the drugs deal with undercover FBI agents Benedict (Ben) Tisa and West, although DeLorean's attorney Howard Weitzman successfully demonstrated to the court that he was coerced into participation in the deal by the agents who initially approached him as legitimate investors. He was acquitted of all charges, but his reputation was forever tarnished. After his trial and subsequent acquittal, DeLorean quipped, "Would you buy a used car from me?"

In the end, sufficient funds could not be raised to keep the company alive. DMC went bust in 1982, taking with it 2,500 jobs and over $100 million in investments. The British government attempted to revive some usable remnants of the manufacturing facility without success, and the Dunmurry factory was closed. DeLorean himself retired in New Jersey, and the dream with which he had mesmerized Britain's Labour government, of industry rising out of the ashes of Northern Ireland's sectarian conflict, was shattered. He claimed that the DMCL was deliberately closed for political reasons, and at the time of closing was a solidly viable company with millions of dollars in the bank and two years of dealer orders on the books.

A large number of the original cars are still on the road after over 30 years; most estimates put it at 6,500 cars surviving out of just over 9,000 built. There is an active enthusiast community around the cars, with strong owners' clubs. A number of businesses were set up after the demise of DMC to provide parts and service, and most of those are still in existence. In particular, DMC (based in Humble, Texas), operates under entirely new ownership and with no direct ties to the original DeLorean Motor Company. It purchased the parts surplus from Consolidated International and offers many aftermarket parts solutions to replace exhausted stock.

Many aftermarket improvements have been offered over time to address some of the flaws in the original production cars, and to improve performance. A common opinion of the car is that in stock form it is somewhat underpowered, and a variety of solutions have been implemented, from complete engine swaps (either to a larger PRV engine, or to completely different engines such as the Cadillac Northstar engine), turbocharger kits (single or twin-turbo), down to simpler solutions such as improved exhausts and other normal engine tuning work.

Despite being cleared of all drug trafficking charges, DeLorean still had to battle many legal cases (stemming from the company's bankruptcy) well into the 1990s. He declared bankruptcy in September 1999 and was evicted from his 434 acres (1.76 km2) New Jersey estate in March 2000. He died of stroke complications at 80 years of age on March 19, 2005.

In August 2007, it emerged that due to demand for the DeLorean DMC-12, DMCH would start selling refurbished cars.Businessman Stephen Wynne has purchased all the remaining parts for the car and builds them in Houston. Currently, a DeLorean can be assembled from the ground up using a combination of new, original and reproduction parts for US$57,500 and still carry a 1980s title, while unrestored but good condition vehicles run from about US$25,000 upwards.

On December 3, 2009, DMC released a collection of t-shirts and hats in collaboration with streetwear brand The Hundreds, featuring modernized images of the DMC-12 in Los Angeles culture based graphic designs. The collaboration project also includes a special edition DMC-12 painted in The Hundreds recognizable JAGS pattern in black and flat black which will be also for sale on December 3, 2009 and displayed at The Hundreds flagship store in Los Angeles the entire day.

In November, 2010, in collaboration with DMC, Nike released a limited edition DeLorean Dunk shoe with an estimated production of 1,000 pairs at a suggested retail price of $90.