The Delage car factory was involved in racing from its foundation in Even the first single-cylinder car of Louis Delage was entered for races.
After the First World War the company tried to make its mark in the luxury range. A big six-cylinder model with a 1 litre capacity for each cylinder was built. The camshaft, located in the cylinder head, was driven by a vertical bevel drive shaft. However, the car was a commercial failure.
Bigger successes came with races. Delages came 2nd and 3rd in the 1924 French Grand Prix in Lyon, and a year later the outstanding racing driver Robert Benoit won this event in a Delage. In 1927 Benoit won the Grand Prix of Montlhéry, the Monza, and the San Sebastian, making Delate the most successful racing cars of the year. At the same time, the company kept an eye on the so-called Concours d'É/égance, which were popular at that time. At the 1929
Paris Motor Show a new model, D8, was introduced. It had an in-line eight-cylinder 4060 cc engine, with bore and stroke of 77x109mm.

The touring version developed 59.2kW (80hp), the sports 66.2kW (90hp). The four-speed gearbox and the engine were one solid block. The rigid front axle was suspended on semi-elliptic leaf springs. The car weighed 1440kg (31751b). In 1934 a 12-cylinder Delage won the perfection contest in Cannes, where it was exhibited in a coupé-de-ville version. In 1939, the jury in Monte Carlo was so impressed by the Delage D8/120 that this car, fitted with Villars cabriolet body, almost 5.5m (18ft) long, was awarded the first prize. In spite of all this success the company suffered from financial difficulties, and in 1935 Louis Delage had to sell out to the Delahaye car factory. Émile Delahaye had been producing up-market cars since 1894 and his company was known for fast motor boats and the taxi cabs it supplied to New York City.
Delage cars were produced under that name even after amalgamation, but both Delage and Delahaye disappeared from the market in 1954.

Both versions were produced till 1933.

The "Delage D8" was powered by a straight 8 engine which was a first both for Delage and for the French auto-industry. The 4061cc engine featured an overhead centrally positioned camshaft and a listed maximum output of 102 hp (76 kW) at 3,500 rpm for the “D8 Normale” and 120 hp (89 kW) in the “D8 S” version. Power was delivered to the rear wheels through a four speed manual gear-box featuring synchromesh on the upper two ratios.

The drum brakes operated on all four wheels. Suspension was traditional, involving rigid axles front and back with semi-elliptic leaf springs and “friction dampers”.

In 1933 Delage introduced the “D8-15” in which the size of the 8 cylinder engine had been reduced to 2668 cc. The “-15” suffix referred to the 15CV car tax band in which the smaller engine placed the car. The lesser performance of this version of the Delage D8 moved the model downmarket in the direction of volume automakers such as Citroen who were already working on a 16 CV 6 cylinder version of their newly introduced Traction model (although the project seems to have been a low priority for Citroën and the car in question would only appear in the market, initially very cautiously, in June 1938).

The 15CV Delage D8, like the original 23CV version, was produced both in “-Normale” versions and in a shorter wheelbase “-S” version. However, the Delage D8-15 had been withdrawn by the end of 1934.

In April 1935 the manufacturer’s financial difficulties culminated in the closure of Delage plant at Courbevoie, as a result of which the D8-85 and Delage D8-105 were taken out of production.

The arrangements with Delahaye were worked through over a period of several years, with Delage effectively a Delahaye subsidiary by 1938. Walter Watney, the British born entrepreneure who established in 1935 the Delage sales and marketing company “SAFAD”  remained in post till 1940. Greater urgency was needed over the question of where to build the cars now that the Delage factory had closed. The solution already in place by 1936 involved continuing production of Delage engines and retaining other mechanical components, but installing them on existing Delahaye chassis.

The first D8 to be produced at the Delahaye Paris plant under the new arrangements was the D8-100. In this period Delahaye were producing cars with fashionably flamboyant bodies from bespoke body builders such as Figoni et Falaschi and Saoutchik, and the Delage cars followed the same trends. The D8 as the top “mainstream” Delage model, turned up, during the second half of the decade, with various fabulously aerodynamic profiles. Coachbuilders who had traditionally worked closely with Delage during the years of independence, chief among them Letourneur & Marchand and their subsidiary, Autobineau, were also responsible for many eye catching D8 bodied cars during this time.

The D8-100’s 8 cylinder engine was now increased to 4302cc, the cylinder bores giving rise to a fiscal horsepower of 25 CV., Power output for the « D8-100 » was listed at 90 hp (67 kW), although by 1937 105 hp (78 kW) at 3500 rpm was the value given. By this time the Cotal pre-selector transmission, previously an option, came included in the price of a Delage D8. Delahayes were still powered by six cylinder engines, and the Delage D8 was the top model produced under either brand. 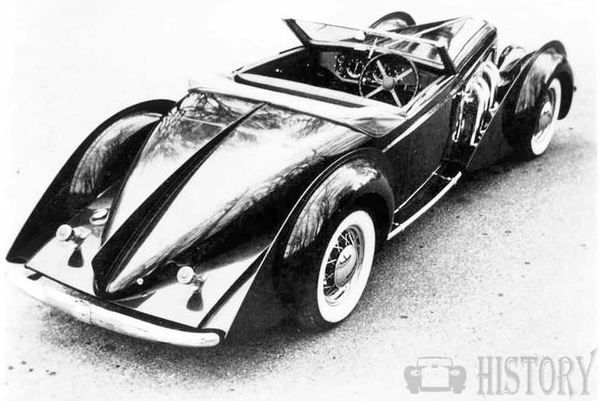 In 1939 the larger engine from the D8-120 also found its way into the D8-100. However, with the declaration of war in 1939 and the invasion of northern France, in 1940, passenger car production came to an end, as the Delahaye plant was taken over by the German military occupation. Although the six cylinder Delages would return in 1946, after the war, the eight cylinder D-8 did not. 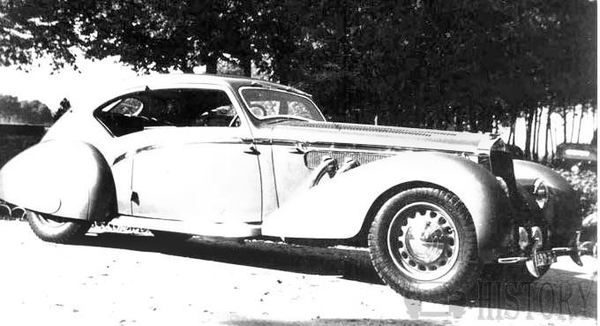