The Daimler Fifteen, was a saloon car at the low end of this manufacturer’s range, announced in September 1932. It was the first Daimler product for more than two decades with an engine that breathed conventionally through poppet valves. Conventional valve gear had now been so improved the former advantages of the Daimler-Knight sleeve-valve technology were superseded. The car's name came from its tax rating of 15 hp.The design of its 6-cylinder 1.8-litre engine was shared with the 4-cylinder 1.2-litre Lanchester Ten which was installed in Lanchester's shorter versions of the same chassis and bodies and using the same Daimler semi-automatic transmissions.

This new Fifteen was the first Daimler to be offered at less than £500 since World War I. The Great Depression of the 1930s was now well established and Daimler, responsible for economical BSA three-wheelers and now the new mid-price Lanchester range was coming downmarket to better weather the financial storm. Perhaps it took twenty years but this risky strategy with the Daimler name may have lost Daimler its super-luxury reputation and eventually brought about its demise.

In August 1934 in anticipation of the reduction in annual tax charge it was given a larger 2-litre engine. Again in August 1936 the engine was increased to 2.2-litres then another two years later to a full 2½-litres.

The long-stroke engine's six cylinders and upper half of the crankcase are all in one block, like the detachable cylinder head, of cast-iron. The head carries the valves and rocker gear operated by pushrods from the chain-driven camshaft running in an oil bath within the block below. The pistons are of aluminium alloy. The crankshaft runs in four bearings and has a vibration damper.

Lubrication is fully forced including to the gudgeon pins. Cold starting conditions are provided for by splash lubrication to all vital parts. There are separate inlet and exhaust manifolds on the offside (left) with a hotspot. Cooling water circulates naturally to the radiator. A mechanical fuel pump delivers petrol from a tank at the back of the car.

Automatic engine starting is not needed as, owing to the fluid flywheel, the engine cannot be stalled in the ordinary way.

The transmission consists of the Daimler fluid flywheel and its Wilson self-changing pre-selective, four-speed gearbox. An open propellor shaft takes the power to an underslung, worm-driven back axle.

The pre-selective finger-and-thumb lever for choosing gears is under the steering wheel and may be worked by the left hand.

Engine, fluid flywheel and gearbox are assembled as one unit held at four points with rubber. The two back bearers are on the forward parts of the X-member of the chassis frame.

The springs are all semi-elliptic and are supplied with hydraulic shock absorbers. The springs are set wide to minimise any tendency to roll. On the radius-rod-controlled front axle they are shackled forwards, flat, splayed and held out of centre. The back springs are under the axle and outside the chassis frame.

Hydraulic four-wheel brakes by Lockheed are fitted with a vacuum servo. The frame passes below the rear springs to allow a low floor without wells within the foorboards.

Steering is by cam.
A redesigned cylinder head and an increase in cubic capacity to 2003 cc by adding 10 mm to the already lengthy stroke was claimed to have improved performance by 10% to 15%. It did not affect the tax rating of the engine. The opportunity was taken to make a number of small improvements including the provision of a water pump and thermostatic control of the coolant circulation. The top gear mechanism of the gearbox was also improved to avoid a hum when the car was idling in neutral. The complete car was now stated to weigh 25.25 cwt.Engine upgrade for 1935 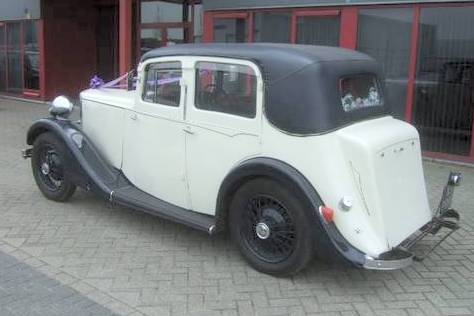