The Daimler Majestic Major DQ450 was a large luxury saloon made by Daimler in Coventry between November 1960 and 1968, using a 4,561 cc V8 engine and offered as a much more powerful supplement to their then current Daimler Majestic.

A substantially lengthened limousine version of the same chassis and bodyshell, the Daimler DR450, was available from 1961 until the V8 engine ended production.

Though the Major was announced and displayed on 20 October 1959 at the London Motor Show, the car on the show stand was a prototype and production did not get under way until November 1960. It was offered as a supplement alongside the slightly shorter 3.8 litre Majestic released in 1958. Both cars used the same chassis and bodyshell, the Major having an extended boot as well as the new engine which was lighter and much more powerful.

The engine transformed the staid Majestic into a high performance car capable of 120 mph (190 km/h) and provided said both Motor Sport and The Autocar, sports saloon when not sportscar performance. At high speeds the car was very stable directionally and could be cornered safely very fast for such a large car. It is faster than a Mark X Jaguar up to 80 mph (130 km/h) despite its 1880 kg bulk and it has been said that Jaguar tried a Daimler 4.5 motor in a Mark X and it did 135 mph (218 km/h).

External differences from the Majestic were a D motif on top of the bonnet, cast-in V symbols on the ventilation air intakes and six inches added to the length of the car resulting in a longer boot and longer bumper returns. Twin exhaust pipes were displayed too. Front seats could be supplied as individual chairs or one bench. 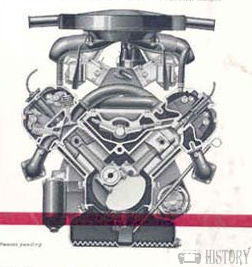 It was built on Daimler's standard (first produced by Daimler in 1937) massive cruciform-braced box-section chassis with their conventional coil-sprung independent front suspension and a well located 'live' rear axle using semi-elliptic leaf springs. As with the Majestic, there were four-wheel Dunlop disc brakes with a vacuum servo.

The combination of an imported Borg-Warner DG (Detroit Gear) 12 automatic transmission, power steering and Dunlop's power disc brakes on all wheels made the Major in those respects a mechanically advanced car for its time. Its body, however, was originally designed for the Majestic by Daimler subsidiary, the old coachbuilding firm Carbodies and they provided the bodies in conjunction with Park Sheet Metal. They were finished in cellulose paints allowing a selection of colours not available in the new synthetic finishes used by Jaguar. They were built at Browns Lane on separate hand-moved lines.

The Majestic Major's turning circle was 42 feet (12.8 m). The car was not one for manoeuvering in tight spaces; even with (initially only optional) power steering, 4.5 turns lock to lock were required.

Later versions were supplied with power steering as standard, a limited slip differential and an alternator.

The bodies were of all steel construction. Although zinc phosphate coated they deteriorated more rapidly than expected of coachwork on a Daimler chassis. 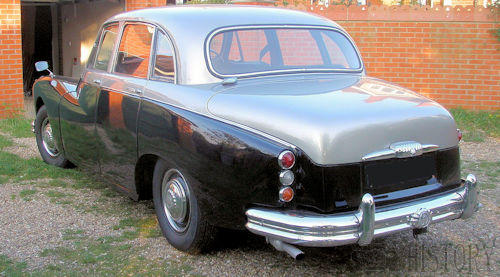