The Ferret armoured car, also commonly called the Ferret Scout car, is a British armoured fighting vehicle designed and built for reconnaissance purposes. The Ferret was produced between 1952 and 1971 by the UK company, Daimler. It was widely adopted by regiments in the British Army as well as Commonwealth countries throughout the period.

The Ferret was developed in 1949 as a result of the British Army's need to obtain a replacement model for its Second World War light armoured vehicles. Due to the success of their Reconnaissance Scout Car, the "Dingo", Daimler was employed to design and manufacture the Ferret.

The Ferret shared many similar design features with the Dingo and Canadian Ford Lynx, but featured a larger fighting compartment and an optional small machine gun turret. It was built from an all-welded monocoque steel body, making the vehicle lower but also making the drive extremely noisy inside as all the running gear was within the enclosed body with the crew. Four wheel drive was incorporated together with "Run flat" tyres (which kept their shape even if punctured in battle, thus enabling a vehicle to drive to safety.) The turret, though not fitted to all models, carried a single machine gun. Six grenade launchers fitted to the hull (three on each side) could carry smoke grenades.

It is fast and small enough to be used in an urban environment but strong enough to negotiate rugged terrain off road. The Ferret is no longer in service in the British Army, although several Commonwealth countries still operate them to this day. They have been popular with private collectors due to the compact size and affordable price e.g. around $20,000 to $30,000 in the USA, $40,000 to $60,000 in Australia and New Zealand.

In 1975, 3 Ferrets sold at a government surplus auction in Adelaide, South Australia for $900 to $1500 each. Though all were complete (except for gun), only 2 would start and run. Two were bought by farmers and one by a local used car dealer who parked it in his front lot for a few years to attract customers.

A total of 4,409 Ferrets, including 16 sub-models under various Mark numbers, were produced between 1952 and 1971. It is possible to upgrade the engine using the more powerful FB60 version from the Austin Princess 4-Litre-R; this upgrade would provide 55hp over the standard B60 engine.

There are several Marks of Ferret, including those with varying equipment, turret or no turret and armed with Swingfire anti-tank missiles. Including all the marks and experimental variants there have probably been over 60 different vehicles. 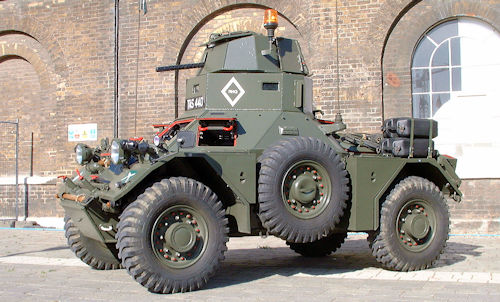