The Daimler Armoured Car was a successful British armoured car design of the Second World War which continued in service into the 1950s. It was designed for scouting and liaison work but could prove useful in 'police actions' as a wheeled tank.

The Daimler Armoured Car was a parallel development to the Daimler Dingo "Scout car", a small armoured vehicle for scouting and liaison roles. It was another Birmingham Small Arms design. A larger version designed upon the same layout as the Dingo fitted with the turret similar to that of the Mark VII Light Tank and a more powerful engine. Like the scout car, it incorporated some of the most advanced design concepts of the time and is considered one of the best British AFVs of the Second World War. The 95 hp engine was at the rear linked through a fluid flywheel to a preselector gearbox and then by propshafts to each wheel. Four wheel steering similar to early models of the Scout car was considered but not implemented following experience with the Dingo.

The prototypes had been produced in 1939, but problems with the transmission caused by the weight of the vehicle delayed service entry until mid-1941. 2,694 armoured cars were built by Daimler.

The Daimler had full independent suspension and four wheel drive. Epicyclic gearing in the wheel hubs enabled a very low ratio in bottom gear - it was credited with managing 1:2 inclines. The rugged nature combined with reliability made it ideal for reconnaissance and escort work. 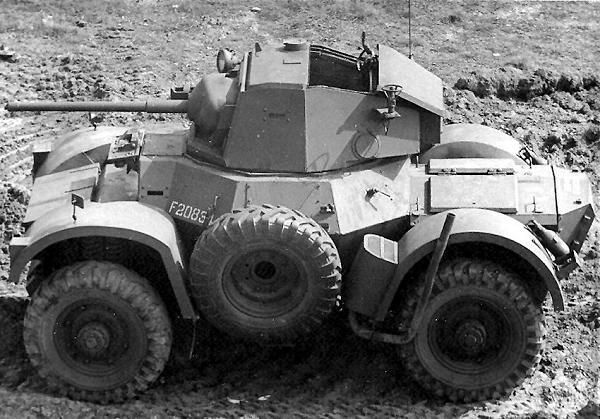 The Daimler saw action in North Africa with the 11th Hussars and the Derbyshire Yeomanry. It was also used in Europe and a few vehicles reached the South-East Asia theatre. A typical late war recce troop in North West Europe would have two Daimler Armoured Cars and two Daimler Dingo scout cars.

To improve the gun performance, some Daimlers in the European Theatre had their 2-pounders fitted with the Littlejohn adaptor which worked on the squeezebore principle. This increased the gun's theoretical armour penetration and would allow it to penetrate the side or rear armour of some German tanks.

Daimlers were used by the territorial units of the British Army until 1960s, outlasting their planned replacement, the Coventry Armoured Car. It was still being used by 11th Hussars in Northern Ireland as late as January 1960. It was operated with B Squadron of the Hussars which also had Daimler Dingoes. 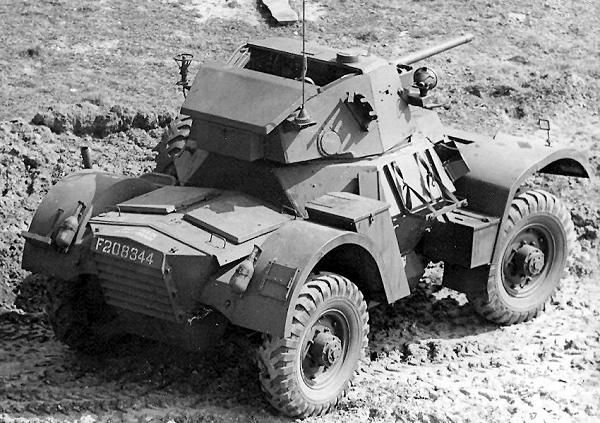