The Daimler Scout Car, known in service as the "Dingo" (after the Australian wild dog), was a British light fast four-wheel drive reconnaissance vehicle also used in the liaison role during the Second World War.

In 1938 the British War Office issued a specification for a scouting vehicle. Three British motor manufacturers: Alvis, BSA Cycles and Morris were invited to supply prototypes. Alvis had been in partnership with Nicholas Straussler and provided armoured cars to the Royal Air Force, Morris had participated in trials and production of armoured cars, and BSA Cycles -whose parent Birmingham Small Arms (BSA) was involved in armaments - had a small front wheel drive vehicle in production.

Testing began in August 1938. All were of similar size and layout - rear engine and all four wheels driven. The Morris design was eliminated first - suffering from poor speed even after modification by its builders. The Alvis prototype - known as "Dingo" - could manage 50 mph over a cross country course but had a high centre of gravity. The BSA prototype was completed in September and handed over for testing. By December it had covered 10,000 miles on- and off-road with few mechanical problems. Policy from the War Office changed to a requirement for better armour with the effect that an armoured roof was needed. As a consequence the BSA vehicle needed a more powerful engine and strengthened suspension. It was chosen over the Alvis and the first order (172 vehicles) for the "Car, Scout, Mark I" was placed in May 1939.

The actual production was passed to Daimler, which was a vehicle manufacturer in the BSA group of companies. The design was seen to have potential and served as the basis for the development of a larger armoured car - a "Light Tank (Wheeled)". Design work on what would become the Daimler Armoured Car began in April 1939 and the first pilot built by the end of the year.

The vehicle was later officially designated Daimler Scout Car, but became widely known by the name of Alvis's design - "Dingo".

Arguably one of the finest armoured fighting vehicles built in Britain during the war, the Dingo was a small two-man armoured car. It was well protected for its size with 30 mm of armour at the front. The 2.5 litre 55 hp engine was located at the rear of the vehicle. One of the ingenious features of Dingo was the transmission; a pre-selector gearbox and fluid flywheel that gave five speeds in both directions. As first produced the Scout Car had four-wheel steering; this gave it a tight turning circle of 23 ft (7.0 m). However inexperienced drivers found it difficult to control and so steering of the rear wheels was dropped in later production at the cost of increasing the turning circle to 38 ft (12 m).

The layout of the transmission components in the lower hull contributed to its low silhouette. The transfer box and its single differential was centrally positioned and propshafts on either side ran to the wheels front and back.

Although the Dingo featured a flat plate beneath the chassis to slide across uneven ground, it was extremely vulnerable to mines. No spare wheel was carried, but it was not really necessary because of the use of run-flat (nearly solid) rubber tyres instead of pneumatic. Despite the hard tyres, the independent coil suspension gave it a very comfortable ride; each wheel had about 8 inches of vertical deflection. A swivelling seat next to the driver allowed the other crew member to attend to the No. 19 wireless set or Bren gun when required. It had the ideal quiet engine and a low silhouette.

The Dingo was in production throughout the war. To bring other production resources into use, the design was passed to Canada and an equivalent vehicle was built using a Ford chassis. Due to the different transmission arrangement, the resulting vehicle was about a foot taller. 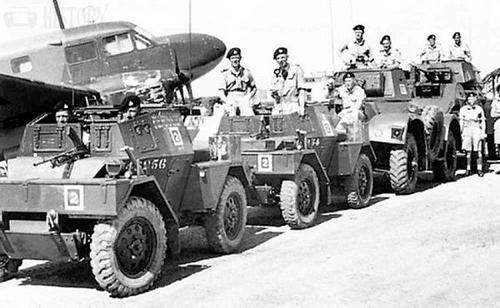 The Dingo was first used by the British Expeditionary Force (1st Armoured Division and 4th Northumberland Fusiliers) during the Battle of France. It turned out to be so successful that no replacement was sought until 1952 with the production of the Daimler Ferret. Principal users were reconnaissance units with a typical late-war recce troop consisting of two Daimler Armoured Cars and two Daimler Dingoes. The vehicle was highly sought-after with damaged Dingoes often being recovered from vehicle dumps and reconditioned for use as private runabouts. One such 'off establishment' vehicle was rebuilt from two damaged Dingoes in Normandy, 1944, by REME vehicle fitters of 86th Anti-Tank Regiment, Royal Artillery. They operated this Dingo for about a week before a higher ranking officer spotted it and commandeered it for himself.

Writing in 1968 author R.E. Smith (British Vehicles and Army Equipment) said that all Dingoes had now been withdrawn from British service - except for one used as a runabout at an armoured establishment - but some might have remained in Territorial Army storage at that date. In mid-1970s the Dingo was still being used by Cyprus, Portugal and Sri Lanka. Some may have been in reserve store with other minor nations. Surviving vehicles are now popular among historical re-enactors with reconditioned Dingoes commanding a good price.

Dingo of the 12th Lancers

Production went through 5 variants which were mostly minor improvements. 6,626 vehicles were produced from 1939 to 1945.

Mk I
original model with four-wheel steering and sliding roof.
Mk IA
as Mark I but with a folding roof.
Mk IB
reversed engine cooling air flow and revised armour grilles for radiator
Mk II
As the Mk IB but with steering on the front wheels only and revision of the lighting equipment.
Mk III
Produced with a waterproofed ignition system. No roof.

Lynx Scout Car
A closely related vehicle, the Lynx Scout Car, or "Car, Scout, Ford Mark I" was produced by Ford Canada in Windsor, Ontario. The Lynx took a Dingo-type hull and set it on a chassis with four wheel drive taken from the rear mounted engine. While the engine was more powerful than the Dingo's, the gearbox and suspension were inferior. 3255 units were built, entering service sometime around 1943.

Another Dingo clone, the Autoblinda Lince was developed by Lancia, Italy. In 1943-1944, 129 cars were built. They were employed by both German and RSI forces. 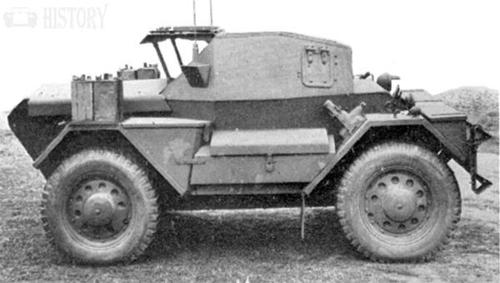