The Daimler limousine DS420, popularly known as the Daimler Limousine, is a large limousine produced by The Daimler Company Limited between 1968 and 1992. The vehicles are used extensively as official state cars in several countries, including by the British, Danish and Swedish royal houses. The car is also commonly used in the funeral and hotel trades.

The DS420 began production in 1968, replacing the DR450 which had been based on the Majestic Major. Unlike its predecessor, it had no Daimler engineering, but was entirely a Jaguar product, utilising the 4.2 litre version of the Jaguar XK straight-six engine. It also replaced the Vanden Plas 4-Litre Princess Limousine, and was initially produced at the Vanden Plas works in Kingsbury, North London. It was announced on 11 June 1968.

The Limousine was based on the floorpan of Jaguar's 420G flagship (not to be confused with the smaller Jaguar 420), but with a wheelbase extended an extra 21 in (533.4 mm). The frontal styling was similar to the original Daimler Sovereign, with the Jaguar four-headlight treatment first seen on the 420G's predecessor, the Mark X, mated to a Daimler radiator grill bearing the traditional fluting. Jaguar Mark X/420G underpinnings were also apparent from the twin ten gallon fuel tanks set in each of the rear wings, each with its own electric SU pump selected by a dashboard mounted switch.

The driver sat on a full width bench seat in a relatively upright position which was said to make length-wise adjustment for different sizes of driver unnecessary, although there was 2.75 in (7 cm) of telescopic adjustment available on the low-set steering wheel.

The passengers sat on a bench-seat behind the glass division in opulent comfort — the DS420's rear seat spanning over 6 feet (1.8 m) in width. The dimensions of the vehicle are very similar to those of the Rolls-Royce Phantom VI with which the limousine was designed to compete, although the Daimler significantly undercut the Rolls-Royce on price.

The top speed available from this 245 bhp (183 kW), three speed automatic, independently suspended, four wheel disc braked Daimler limousine was 110 mph (176 km/h). Undercutting the Phantom VI in price by 50% or more, the big Daimler was considered to be a fine vehicle for the cost with its Le Mans-winning Jaguar engine, the last car to use it, and bespoke construction.

Originally the cars were built at the Vanden Plas works in Kingsbury Lane, London from bodyshells made by Park Sheet Metals Company assembling panels supplied by Motor Panels of Coventry and by Pressed Steel Fisher. Early limousines bore the 'Daimler Vanden Plas' designation on treadplates and workshop manuals. Production moved to Jaguar in Coventry in 1979, where it continued until 1992. The move to Coventry also brought the third and most extensive facelift in the car's life, when larger bumpers and a revised rear number-plate surround were fitted. The previous facelift, in 1974, modernized the window arrangement for the rear passengers, namely how the previous design's opera windows having a split with one portion that could be rolled up and down and one static, being replaced with one single window that could be rolled up and down. It also addressed the corrosion issue of earlier cars (which related to this previous opera windows), slightly changed the dimensions of the grill and badge placement on the exterior, and lessened the amount of woodwork in the interior. 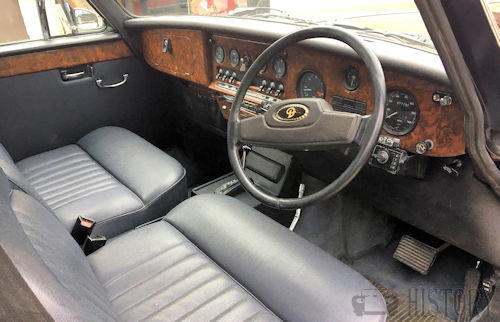 As well as the complete limousine, the factory also supplied part-bodies to external coachbuilders to allow them to construct hearses.

Delivered vehicles varied from very basic models with wind up windows to a mobile boardroom, that was reported to have been designed for use by Jaguar boss Sir John Egan in 1984, complete with TV, computer, printer and Cocktail Cabinet. The DS420 was very much a bespoke vehicle, with an extensive list of options. Individual owners tended to fully option their cars. The service industry, including the funeral trade and limousine companies, tended to lightly option their cars. Until the early 1980s, after their purchase by Hertz, Daimler Hire was one of the largest clients. Daimler Hire cars were offered as limousine transportation, as well as for state and official use. As such, most Daimler Hire cars are well optioned, including electric division window, air conditioning, matching leather interiors, and the official use hood flag mount.

Always hand-made, the DS420 had a fascia very similar to some contemporary (in 1968) Jaguars, particularly the Mark X and 420G, remaining faithful for many years to the old fashioned steering column and to the pencil-thin steering wheel. Two cars have been built in landaulette bodywork by the factory (and apparently neither have survived), but many have been converted to laundaulettes for the wedding car industry (some more successfully than others).

By 1992 the DS420 was the only model in the Jaguar range still using the XK engine, along with other parts of the drive train and suspension, and although the car still appealed to its traditional customers, production was no longer economic. No direct replacement was produced by Jaguar, although coachbuilders have adapted the Daimler version of the XJ6. 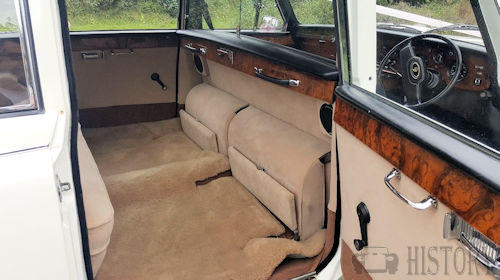 The Daimler DS420 is widely used among the funeral trade, serving as both the executive car for grieving relatives and the hearse for the deceased, after customization to fit funeral needs. It is also seen in official use across the world, including by the Danish Royal House the Governor of Tasmania, and the Governor of Bermuda in the early 1970s. The vehicle was also purchased by many local authorities and embassies. The Inter-Continental Hotel, Hong Kong, formerly The Regent Hotel has been said to have purchased twenty-two Daimler DS420s across the years.

The British Royal Mews is now in possession of three Daimler DS420s available for Royal use on state occasions and for visiting dignitaries. The late Queen Elizabeth The Queen Mother had four DS420 models over the years (all registered NLT1 or NLT2), including one of the last three models to be produced in 1992 (the other two going to Queen Elizabeth II, although rarely used, and the other retained by Jaguar for use in Coventry, now in the possession of the Jaguar Daimler Heritage Trust). All of the cars delivered for royal use featured certain special features including cloth seats, removal of chrome around the doors, a bullet-shaped blue light and a mount on the roof for the Royal Standard and Coat of Arms. These cars were a reminder of the royal patronage that Daimler lost to Rolls-Royce in the early 1950s.

One of the Queen Mother's Daimler DS420s, painted in Royal Claret, is now in the Royal Mews, along with two other models already owned by the Queen. These are classed as state cars although, unlike the Royal Rolls-Royce and Bentley models in the royal fleet, they do have number plates.

One of the most famous late appearances of the DS420 was for the funeral of Diana, Princess of Wales; respectively, both the hearse and the mourning limousine following it were DS420s.

The Royal Family of Denmark, in addition to many other prestigious vehicles, have three Daimler DS420s.

Jean, Grand Duke of Luxembourg used a Daimler DS420 with the registration number '1' as his official limousine from 1970 to 1988 . 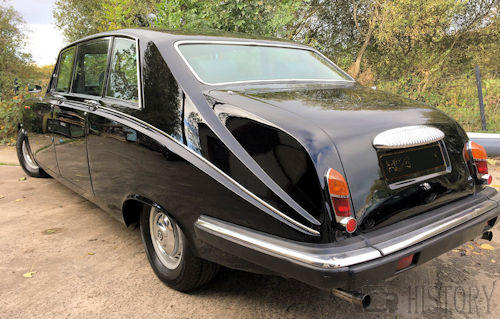