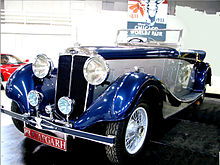 The Daimler Straight-Eight poppet-valve eight-cylinders in-line petrol engine was announced by The Daimler Company Limited on 1 May 1934 with its first vehicle, Daimler's new Twenty-Five saloon and limousine. The new engine was the first of a series intended to replace Daimer's outmoded large sleeve-valve six-cylinder and twelve-cylinder engines. The sleeve-valve engines with silence and great low-speed torque were unable to spin fast enough to make full use of new combustion technology and remain reliable. These new engines were intended to run comfortably at 4,000 rpm.

The general aim with the engine was "to give the greatest luxury in travel as expressed by quietness, smoothness, flexibility, and general ease and safety of control rather than great speed".

While a great deal of useful experience must have been acquired by Daimler from Lanchester, who were still building their overhead camshaft straight-eight when they were purchased in 1931, the Daimler Straight-Eight is not a copy.

In the Daimler Twenty-Five the straight-eight was mounted using their Daimler-patented bi-axial design by which flexible support is given to the engine at five points. The gearbox was also held with rubber at three points and one underneath

The one-piece cylinder-head had the spark plugs sunk into it at an angle along the nearside. The make and break and the distributor were set almost vertically at the side of the block. Alongside was the coil with a spare mounted beside it. The generator on the offside shares a triple belt drive with the water pump and the radiator cooling fan.

The crankshaft was fully counterbalanced mounted in nine main bearings and was fitted with a vibration damper. The valves like other poppet valve Daimlers had exceptionally wide clearances. They were overhead and driven by pushrods from a chain driven camshaft taking power from the rear end of the crankshaft.

In September 1935 it was announced that the cylinder bore was now increased to 80mm increasing the engine's capacity from 3.746 to 4.624 litres following the 25% reduction in horsepower tax which took effect on 1 January 1935. intended to provide improved performance but more important lighter running for the engines and a consequent extension of silent and comfortable service. The tax horsepower rating is now 31.74.

In most respects a bored out version of the V26 which it replaced but with the compression ratio increased to 6 to 1. These engines were also fitted to a number of chassis made after 1936 which were fitted with a Lanchester radiator and nameplates.

An entirely new engine to power a livelier car for the owner driver. During 1935 a 3½-litre Straight-Eight open car achieved a maximum timed speed at Brooklands of slightly in excess of 90 mph.