The third generation of the Daihatsu Charade (G100) debuted in 1987. With styling by Daihatsu chief stylist Hiroshi Aoki and colleague Hideyuki Ueda, it originally shipped with a carburetted 1.0 L three-cylinder engine (CB23), also available as a diesel and turbodiesel, or with a 1.3 L four-cylinder with single carburetor (HC-C). Featuring fully independent suspension front and rear, either three-door or five-door hatchback body styles were originally offered. A 1.0 L twin-cam fuel injected intercooled turbo (CB70/CB80), named GTti and delivering 105 PS JIS (77 kW) was later added, only available as a three-door hatch. Fuel injected versions of the 1.3 L four-cylinder (HC-E) and three-cylinder (CB90) were later added. A four-door sedan was released with the 1.3 L EFI engine in 1988. There were two different sport models available (both with G100S-FMVZ modelcodes), the GTti and the GTxx. Both versions are mechanically identical, but the GTxx features many added luxury items. These include full bodykit, lightweight 14" speedline alloys, air-conditioning, power steering, one-touch electric window down, and electric sunroof. Some of these options were also available to buy as optional extras on the GTti. Side-skirts were also fitted to many GTtis, but in some countries they were only sold as a dealer optional extra.

The GTxx is much rarer than the GTti, mainly being sold in Japan, although some were exported and sold in other countries in small numbers. All GTxxs have engine code CB70, whereas GTtis can have CB70 or CB80, depending on the country and region sold. There are no known differences with the actual engine internals, all CB70s feature catalyst emissions control systems. Even some CB80s for Europe featured the catalyst, although UK cars did not. There are more than likely slight differences between the CB70 and CB80 ECU mapping, with CB70 cars quoted as producing 105 PS compared to the CB80's 101 PS (74 kW). This is probably down to the CB70 having the ignition timing mapped more advanced to suit the higher octane fuel used in Japan.

A slight facelift in 1991 gave the cars smoother style rear lights and reflector panel, a slightly longer tailgate top spoiler, and a revised interior trim with fabric also on the door trim panels. There was also a four-wheel drive version of the fuel injected 1.3 (90 PS or 66 kW HC-E engine, G112 chassis code) sold at home and also exported to a few countries, for example in Scandinavia and Switzerland. 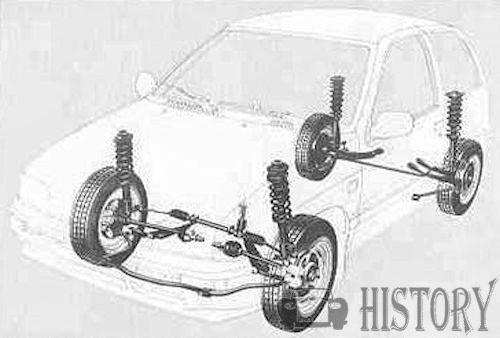 The third-generation car was sold in the United States for just five years, from 1988 through 1992. The car sold poorly, despite construction "as tight as a frozen head bolt" and attractive styling for the market segment, perhaps because of its high price, few dealerships, rough-running three-cylinder, low performance (0-60 mph or 97 km/h in 15 seconds), Toyota, which had recently procured a controlling interest in Daihatsu, withdrew all Daihatsu-badged cars from the US market. Sales for 1989 were 15,118. Only the three-door hatchbacks and four-door sedans were available. The North American Charade appeared in three different trim levels until 1989; the CES (base model), CLS, and CLX. The CES came with a 53 bhp, 1.0L three-cylinder, fuel injected engine called the CB90. The other two variants were available with the standard CB90 or the more powerful 1.3 L four-cylinder SOHC 16-valve fuel injected, all-aluminum HC-E engine. In 1990, the trim levels were reduced to just two, the SE (base) and more luxurious SX. Four-cylinder models were available with a five-speed manual gearbox or a three-speed automatic transmission, while three-cylinder models were offered with the manual transmission only.

In the Australian market, the GTti was unavailable and the turbocharged petrol Charade used the lower powered carbureted engine (CB60/61) from the previous generation. However, quite a few GTtis and GTxxs have been imported from Japan and so do have a good following. In Australia, the third generation was assessed in the Used Car Safety Ratings as providing "worse than average" protection for its occupants in the event of a crash and the second generation was assessed as "significantly worse than average".

The G100 Charade has been built by FAW Tianjin as the Tianjin Xiali since 1988, replacing brief CKD production of the previous generation model there. Heavily facelifted versions with more modern Toyota engines are still available, as well as copied versions like the Huali and various Geely products such as the Haoqing and its derivatives.

In the UK, the GTti had a fairly successful rally career competing in the RAC Lombard Rally in 1989 and 1990 and was highly competitive in the Safari Rally. The GTti won class honors many times and was able to mix it with some of the two-litre cars and on occasion troubling some of the considerably more powerful 4WD cars. With the "turbo factor" increased to 1.7, the one-litre Charade was forced into the same category as the 2-litre cars. The best result was in the 1993 Safari Rally, where Charade GTxx models finished fifth, sixth, and seventh overall. 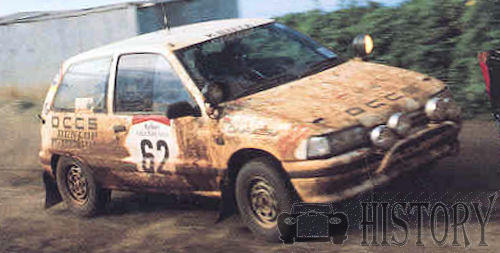