The second generation (L70) Mira/Cuore appeared in August 1985. It had a longer wheelbase and a new generation of three-cylinder engines replacing the previous two-cylinder (AB) versions. Displacement of the new EB engines remained exactly the same, at 547 cc. For the export versions an 847 cc three-cylinder was developed, called ED-10. In September 1986 a special version for the Swiss market appeared, with a narrower bore version displacing 796 cc (called ED-10A). Unlike the fractionally larger standard version, this one suited the four tax horsepower category in certain cantons, while other cantons had prominent tax limits at 800 cc.

As for the domestic Japanese market versions, there were commercial versions (Mira) sold alongside passenger car versions (Cuore). The commercials had temporary rear seats which fold completely flat, and are easily recognized by luggage rails in the rear side windows. As for the previous generation, a version with switchable four-wheel drive was available for the "Van" version (chassis code L71V). The engines were originally carburetted, and either naturally aspirated or turbocharged (with intercooler). These offered 38 PS (28 kW) and 52 PS (38 kW) respectively. The turbo version was originally only available as a Mira (three-door commercial), and was introduced two months after the regular version. Transmissions were either four- or five-speed manuals, with a two-speed automatic also available for the atmospheric versions.

In January 1986, a five-door "Van" (Mira) version was added. A "Walk-Through Van" version, using the regular bonnet combined with near square rear bodywork, appeared two months later. In August 1987, the Mira/Cuore received a minor facelift with a new grille and bonnet, as well as some other detail changes all making for a smoother appearance overall. Two months later a permanent four-wheel-drive version was made available in the turbocharged version. After having undergone another minor change in October 1988, a 50 PS turbocharged Mira Sedan TR/CR series for passenger use was also made available – as a five-door version as well. A limited edition of 500 Mira Sedan TR-XX Limited were also sold. Japanese production of the L70 series ended when the new 660 cc L200 version was introduced in March 1990 in response to new regulations for the kei class. This also marked the end of the division of the line into Mira and Cuore, as the Cuore nameplate was retired in Japan with the introduction of the new model.

Daihatsu's Thai arm carried on producing the L70 series after it was replaced in Japan. In addition to the regular version, they also developed a ute version for the pickup-hungry Thai domestic market from 1990 to 1995, called Mira P1. This was built with a pickup bed, tail gate and redesigned taillights. The Mira pickup was extremely popular, with Daihatsu's Thai sales jumping by 50 percent as a result. Coming full circle, and mirroring the development of the SUV, Daihatsu also developed the Mira P4: a roofed four-seater wagon version of this micro-ute. Some P4s retained the pickup's fold down tailgate, adding a top-hinged glass, while some had a top-hinged one-piece tailgate. Later, there was an extended cab 2+2-seater ute ("Daihatsu Miracab") and also a hatchback with an enlarged rear end, called the "Mint".

While originally using the smaller engines as per the Japanese market, these were too long to be classified as true kei cars. Later cars have the 850 cc engine as used in many other export markets. Nonetheless, the 1997 Asian financial crisis marked the end for Daihatsu in Thailand as sales plummeted from 4,000 in 1995 to 160 in 1997. Production ended in February 1998 and by March 1998 Daihatsu no longer offered cars in the Thai market.

The Daihatsu Mira and Cuore replaced the Daihatsu Max Cuore in July 1980. This was replaced by the second generation (L70) of the Mira/Cuore which was introduced in 1985. For most generations there were two engine sizes available: one smaller version, to suit Japanese domestic regulations, of either 550 or 660 cc, and a bigger-engined version for export markets. The L200 variant (1990–94), for instance, came with a three-cylinder 660 cc engine with 40–64 PS (29–47 kW) in Japan, while other parts of the world received a bigger-hearted variant with an 847 cc. The L500 Mira is the first kei car from Daihatsu to offer a four-cylinder (660 cc) engine. 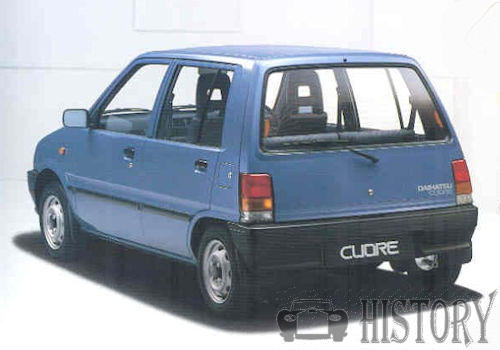