Daihatsu Taft (TAFT stands for Tough Almighty Fourwheeldrive Transport) is a four-wheel-drive vehicle built by Daihatsu between 1974 and 1984. It was also sold as the Daihatsu Wildcat and as the Daihatsu Scat in some markets. The Daihatsu Taft is similar to the Suzuki Jimny, although a bit larger, and was later replaced by the Daihatsu Rugger (also known as the Rocky or the Fourtrak).

The first Taft was the F10, introduced in 1974. It was equipped with a 1.0 L (958 cc) petrol engine and a four-speed transmission with a two-range transfer case. The F10 was available in short-wheel-base (SWB) softtop and hardtop versions.

In around 1977, the F10 was replaced with the F20 series with the 1.6 L (1587 cc) 12R petrol engine. Around the same time the F50 2.5 L DG diesel version was introduced. Both models featured an improved transmission and were available in SWB Softtop and Hardtop versions, either as four- or six-seaters. In 1979, trayback/ute versions of the F20 and F50 introduced as the F25 and F55 models. Around 1983, updated F20/F25 models were introduced with an optional Deluxe version and optional five-speed gearbox. At the same time the F50/F55 models where replaced with the F60/F65 with a 2.8 L DL diesel, with the same Deluxe model version and optional five-speed gearbox. In Europe, Giovanni Michelotti marketed a luxuriously equipped version of the Taft, a version echoed by the later Bertone Freeclimbers.

Between 1981 and 1984, Toyota sold a rebadged Taft known as the Toyota Blizzard. Fitted with the 2.2 L L-series diesel, the LD10 Blizzard featured the same optional Deluxe model fitout as the Taft.

In 1984, the Taft/Scat models were replaced with the Daihatsu Rugger (Fourtrak in the UK, Rocky in Australia and most European markets). In Indonesia, the succeeding Daihatsu Rugger/Rocky/Fourtrak still uses the Taft name. 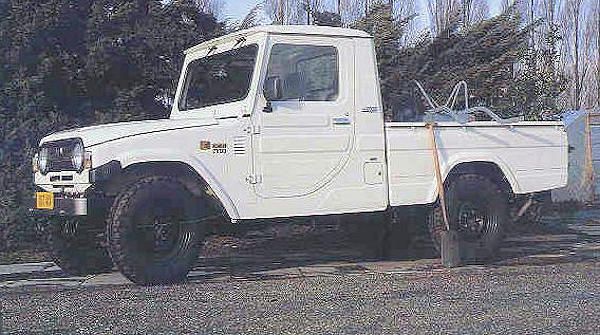