The Daihatsu Storia is a subcompact car/supermini which was produced by Japanese automaker Daihatsu between 1998 and 2004, and was also sold as Toyota Duet. It effectively replaced the similar sized Charade, which was produced alongside it for a year until being discontinued in 1999.

Outside of Japan, with the exception of a few countries, the Storia was sold as the first-generation Daihatsu Sirion.

There are two Rally versions of the Storia/Duet: the Rally 2 and the Rally 4; the latter being the four-wheel drive version. The Rally models have a slightly increased engine output of 108 bhp (81 kW; 109 PS) and boast a class-leading 0-60 mph time of 8.1 seconds (8.9 for Rally 4) and reaching a top speed of 115 mph (185 km/h), giving it 'hot hatch' credibility. The 4Track (or just 4WD outside of Japan) is the four-wheel drive version of the standard 1.3. The F-Speed model is an automatic which can be switched using a dashboard button to using push button sequential gear change on the steering wheel (the name F-speed apparently being a suggested link to Formula-1 style wheel based gear changers). Another version called the Storia X4 was released in Japan. This had an engine with 120 PS (88 kW; 118 hp).

The Storia/Duet was restyled in 2000 with most changes to the front of the car, most notably the grille design. From the A-posts rearward, the design remained almost identical. The dashboard was also extensively redesigned with innovative use made of storage space and a more luxurious appearance.

The Australian market only had the 1.0 litre model up until early 2001, when the sporty 1.3 litre model - known as the GTvi - was added to the line-up. At the time, the GTvi had the most powerful naturally aspirated motor available in its class, developing 101 bhp (75 kW; 102 PS) at 7500 rpm. This version was also known as the Toyota Duet.

In Australia, a sequential transmission was made available in the GTvi version only from 2002. This was an electronically controlled 4-speed automatic transmission with sequential mode activated by a dashboard switch, then gear selection by buttons on the steering wheel.

In December 2001, the Storia/Duet was restyled; the front grille and bumper were changed for a sportier appearance and in some markets the silver accents on the sides were removed (retained for the sporty GTvi model in Australia). The dash and interior were redesigned, incorporating more storage spaces, easier to use controls and higher quality trim. This edition was exported to Europe and Australia as the Sirion in 2002. 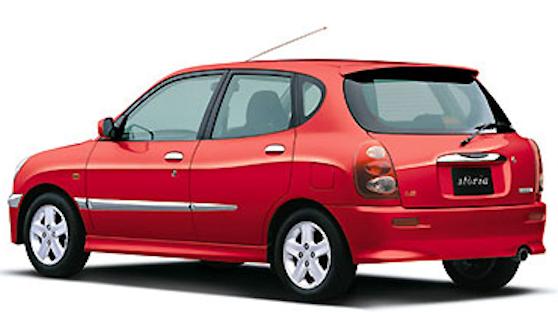