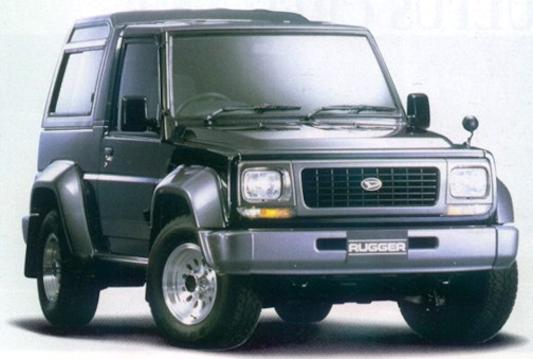 The Daihatsu Rugger was an off-road vehicle built by Daihatsu between 1984 and 2002. The Rugger was also called the Daihatsu Rocky in most export markets, and Daihatsu Fourtrak in the UK. It has also received a series of different names elsewhere, which is why it is often referred to by its chassis code (F70) to distinguish it from its various siblings.

The first generation was sold from 1984 to 1993, replacing the Daihatsu Taft. It was available in short-wheelbase form with a convertible soft top or removable hard top and in extended-wheelbase form with metal top. The extended variant, called Rugger Wagon, could carry up to eight people in the back. Three engines were available: the petrol Toyota 3Y 2.0 L with one overhead cam, a single carburettor and 88 PS (65 kW); and two 2.8 litre diesel variants, normally aspirated with 73 PS (54 kW), or turbocharged with 88 PS (65 kW), both featuring overhead valves. Part-time 4WD was standard on all models. A Toyota-engined version was sold in the Japanese market as the Toyota Blizzard.

The 1984–1992 models were the SWB F70, the LWB F75 and the longer wheel base F77 Pick up. In 1989 the 2.8 turbo diesels underwent a number of changes including timing chains instead of timing belts, square headlights and 4WD engagement in high range using an electric switch via a vacuum pipe.

The second generation was introduced in 1992 and available for export the following year. Among the evolutions was the replacement of the early leaf sprung axles by independent front suspension and a coil sprung rear axle. The petrol engine was enlarged to 2.2 L, with a small power hike to 91 PS (67 kW), while the 2.8 Turbo Diesel was fitted with an intercooler, resulting in a power increase to 102 PS (75 kW). Still, the model was considered too rustic, still not possessing rear doors in the long-wheelbase model, and Daihatsu declined to replace it, concentrating instead on their smaller automobiles.

In Indonesia the F70 versions had a long life, built on several different wheelbases with many styles of bodywork. In addition to the usual three-door station wagon there was also a longer, five-door version as well as a pickup truck. It was marketed there as the Daihatsu Taft, Rocky, or Hiline when powered by diesel engines. With a petrol engine it received the Feroza name (not to be confused with its smaller, F300-series sibling which seems to have never been marketed in Indonesia).

Assembled in Italy for European sales, this version called the Bertone Freeclimber used mechanical components by Daihatsu, although it was powered by a BMW 2,443 cc turbodiesel or one of two BMW petrol engines (1,991 cc and 2,693 cc), all six-cylinders, with a Bertone modified body. The Freeclimber is a well-equipped, high-end deluxe (luxury car) off-roader produced from 1989 to 1992. In France, where only the diesel was available, the importer Chardonnet offered an even more luxurious version. Named after a perfume by Nicolas de Barry it was called "Blue Lagoon", and was available with either Alcantara or leather interior.