On 9 November 1966, Daihatsu introduced the Fellow, also known as Daihatsu 360 in export markets. Originally only available in DeLuxe and Super DeLuxe equipment levels, a Standard version joined in February 1967. Also available with a wagon body (Fellow Van), as a mini-pickup truck and as a panel van from June 1967, the L37 was conventionally built with a front-mounted engine and rear wheel drive. It used a 23 PS iteration of the 356 cc, water-cooled two-cylinder two-stroke "ZM" engine already seen in the Hijet and a four-speed manual transmission.The self-lubricating ("Oil-Matic") little engine weighed only 58 kg (128 lb). The Fellow was the first Japanese car to be equipped with rectangular headlights.

As a result of Honda's 31 hp N360 being introduced early in 1967, a Kei-car horsepower war broke out. Daihatsu's response, the Fellow SS, was presented at the 1967 Tokyo Motor Show in October but did not go on sale until June the next year.A LeMans-style sportscar prototype, the "P-5" with the SS engine was shown alongside. The 32 PS "SS" could do the 400 meter sprint in 21.2 seconds.

The Fellow also received a slight facelift in October 1967, with a new dashboard and steering wheel most noticeable. Another minor change came in January 1969, with a fixed drivers' side headrest and seatbelts installed because of new safety regulations. In July, along with what was literally a facelift (the front bumper was now mounted higher), the lesser engine's output increased to 26 PS and a comparatively luxurious "Custom" version was added at the top of the lineup. The size of the taillights also increased somewhat. An electric version called the Daihatsu Fellow Van EV went on sale in September 1969.

In April 1970, the front-wheel drive L38 Daihatsu Fellow Max was introduced to replace the rear-wheel drive Fellow. Originally only available as a two-door sedan and three-door van (L38V), a sporty hardtop coupé with a lower roofline and a somewhat baroque front-end treatment was added in August 1971 (L38GL). SL and GXL Hardtops received standard front disc brakes. In October 1972 a four-door version (L38F) appeared; it was the only four-door Kei car at the time of its introduction. Dimensions were 2,995 x 1,295 mm as dictated by the Kei car regulations, although the wheelbase was stretched by 100 mm to 2,090 mm. The engine was a 360 cc two-cylinder two-stroke ("ZM4"), offering 33 PS (24 kW) at the time of introduction. In July 1970 the SS version appeared, featuring a twin-carb, 40 PS (SAE) version of the ZM engine (ZM5) - a specific output of over 112 PS per litre. Top speed was 120 km/h, compared to 115 km/h (75 and 71 mph) for the lesser versions. In October 1972, for the '73 model year, engine outputs dropped somewhat, to 31 and 37 PS respectively to lower fuel consumption and meet new, more stringent emissions standards. These engines were called ZM12 and ZM13 respectively.

The Fellow Max received a steady stream of facelifts during its existence. It underwent minor changes in March 1971 (new grille, dash modifications), March 1972 (new dash, round headlights and a new bonnet with longitudinal creases), May 1973 (changes to the fenders and new bumpers that fitted into the bodywork, and another new bonnet) and in October 1973 (new safety equipment). In February 1975 the bumpers were modified again, to allow for the fitment of new, larger license plates. The grille and front bumper arrangement was changed yet again. At the same time the interior saw some changes and the powerful twin-carb model was dropped as it wouldn't pass new emissions regulations. From now on, all models were equipped with the 31 PS "ZM12" engine. In May 1976 the car underwent more thorough changes as new Kei car regulations were introduced. This also marked the end of the Hardtop versions, which anyhow had lost relevance once the twin-carb engine was discontinued.

In export markets, this car was usually sold simply as the "Daihatsu 360". In Australia, where the car went on sale in early 1972 as a two-door sedan, it was called the Max 360X. It was the cheapest new car available in Australia at the time. Unaffected by emissions regulations, it was equipped with the 33 PS version of the engine; in a period road test by Wheels magazine it reached 68 mph (109 km/h) and managed the sprint to 60 mph (97 km/h) in 33.2 seconds. It was also sold as the Daihatsu 360X in New Zealand.

As if the existing four bodystyles didn't suffice, a beach buggy version was introduced simultaneously. While highly prized by collectors today, the Buggy only sold about 100 examples and was only available for a single model year. The 440 kg Fellow Buggy was actually not a "real" Fellow, as it was built on a Hijet chassis, with fibre-reinforced plastic bodywork.The Buggy also used the Hijet's lower powered (26 PS or 19 kW) engine, providing a top speed of 95 km/h (59 mph). 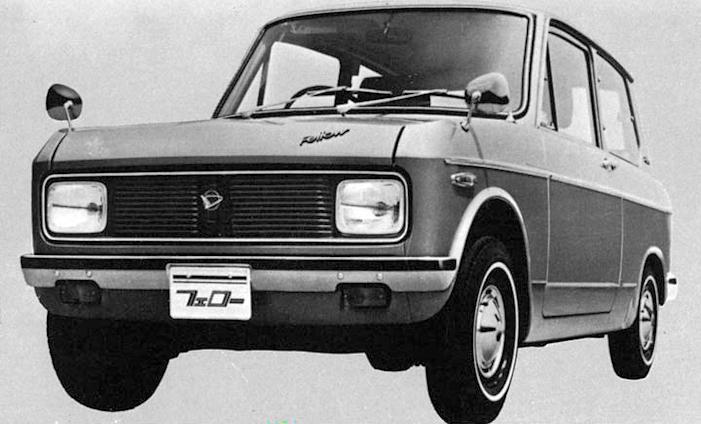