In July 1980, the Daihatsu Mira and Cuore arrived to replace the Daihatsu Max Cuore. A certain amount of confusion arises from the fact that this, the L55-series, was the first generation Daihatsu Mira but is usually considered the second generation of the Cuore – and that the Mira was originally marketed as the "Mira Cuore". The range was facelifted lightly in May 1982, when the Mira dropped the "Cuore" portion of its name. Also new was the sporty five-speed MGX (three doors only), fitted with radial tires. The autoclutch "Daimatic" transmission was replaced by a fully automatic two-speed unit at the same time. In October 1983, turbocharged and four-wheel drive versions of the Mira van were made available (not in conjunction, however).

The L55 series was sold with two main engines: the two-cylinder AB10 unit of 547 cc, and the slightly larger 617 cc AD unit which was installed in the export-only L60 Cuore. They both featured twin balancing shafts, producing a smoothness and silent operations on par with a traditional four-cylinder engine. In tests, the 617 cc version of the car received plaudits for its refinement as well as its "lively" character and "enthusiastic" performance when compared to European competitors such as the Fiat Panda 30 and the Citroën Visa Club, both also with two-cylinder engines The main issue was cost: the balance-shaft equipped bicyclinder supposedly cost as much to build as a conventional four-cylinder engine. The car was also commended by Quattroruote for its agile city driving characteristics – although it could hardly be considered fully fit for the autostrada. The 30 PS (22 kW) "big" version has a top speed of 120 km/h (75 mph).

The bigger engine was introduced in the second half of 1982, as part of a push by Daihatsu to push its European exports. In some markets, the two engines were both available. In Belgium, for instance, they were sold as the Cuore 550 for the small version and as the Cuore 623/625, depending on which bodywork was fitted. The Cuore sold well in both Argentina and Chile in 1980 (4,300 cars shipped), but economic hardship there led to a cancellation of exports by 1982.

In 1983 the Mira Turbo appeared. Only available in the Japanese market, and only as a commercial vehicle, it had a carburetted and turbocharged version of the little two-cylinder engine. This was enough for 41 PS (30 kW) and a resulting top speed of 130 km/h (81 mph).

Giovanni Michelotti used this generation Cuore as the basis for the "Michelotti PAC" prototype (Personal Automotive Commuter) shown at Geneva in 1985. 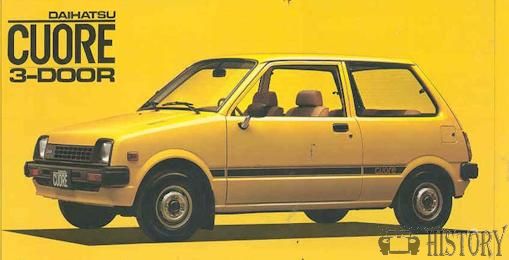 The Daihatsu Mira and Cuore replaced the Daihatsu Max Cuore in July 1980. This was replaced by the second generation (L70) of the Mira/Cuore which was introduced in 1985. For most generations there were two engine sizes available: one smaller version, to suit Japanese domestic regulations, of either 550 or 660 cc, and a bigger-engined version for export markets. The L200 variant (1990–94), for instance, came with a three-cylinder 660 cc engine with 40–64 PS (29–47 kW) in Japan, while other parts of the world received a bigger-hearted variant with an 847 cc. The L500 Mira is the first kei car from Daihatsu to offer a four-cylinder (660 cc) engine. 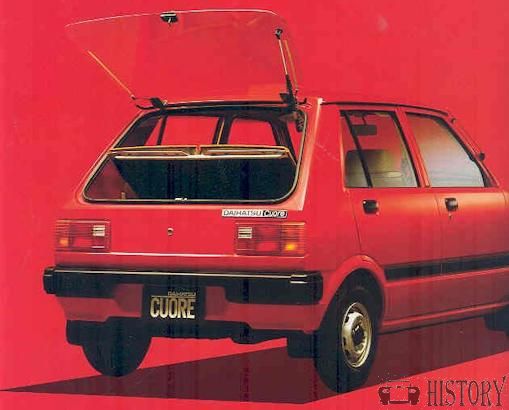