The Daihatsu Applause is a compact car manufactured by the Japanese automaker Daihatsu from 1989 to 2000. It is most notable for its unusual body style, which, despite appearing to be a 4-door sedan, is in fact a 5-door liftback with a notchback-shaped 412-litre trunk and a tailgate.

As Daihatsu firmly established itself as Toyota's small car specialist brand, compact cars were the biggest vehicles marketed by the company. When replacing the long-running Charmant, the company decided to try a unique approach at the segment, with the intention to capitalize on the preferences for sedans, while at the same time offering the flexibility and convenience of a 5-door body.Resulting from such concept, the Applause was presented at the 1989 Geneva Motor Show.

In the first year in the market, Applause's reputation was tarnished by widely publicized incidents of gasoline spurting under excessive air pressure while refuelling, which could lead to very hazardous accidents. Daihatsu fixed the problem in the 1990 model, named Applause Theta, to highlight the improvement.

In 1992, the Applause was mildly facelifted, with a subtle alteration of the front and rear fascias and slight increase in length. The "Theta" designation was dropped. The carburetor engine was not available anymore.

The 1994 saw the cancellation of the AWD version, with a rear fascia upgrade and slight grille alteration given to the rest of the range.

Although Applause can be said to have looked very modern and be at least on par with competition in terms of size back in 1989, after seven years in the market it began to appear quite dated and smaller than newer compact cars. Daihatsu found it economically unjustifiable to replace the car with an all-new model, but rather gave the car an extensive facelift in hope of reviving weakening sales.

The refreshed Applause debuted at the 57th Frankfurt Motorshow in September 1997. Totally new front and rear fascias provided for a much more "formal" appearance, along with a small increase in length. However, the car remained the same with regard to all other measurements, including cargo capacity.

The facelift did not help sales result much, so the model was discontinued altogether in May 2000, without a direct replacement for export markets. In Japan, the Daihatsu Altis, which was in essence a rebadged Toyota Camry, took over its role as Daihatsu's largest sedan.

The Applause was a FF layout car with transversely-mounted engine. A full-time AWD version was sold from 1989 to 1994. 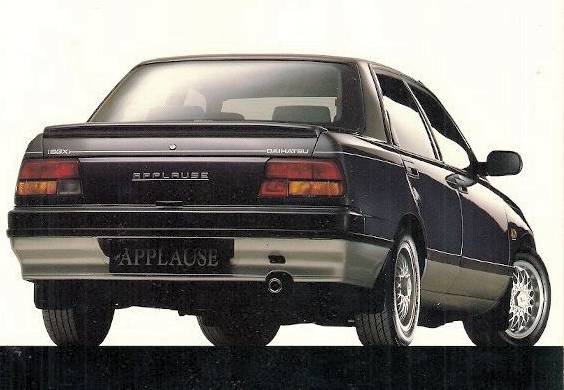