The second-generation Legend was also manufactured by Daewoo in South Korea from 1994 to 1999 under the name of Daewoo Arcadia (ko:대우 아카디아 ), for the southeast Asian market, replacing the Daewoo Imperial. During this period, Honda had a loose alliance with Daewoo, and the Arcadia was larger than Hyundai Grandeur, and Kia Enterprise competitors.

Daewoo Motors (GM Korea's predecessor) sold more than 800 vehicles. In 1992, Japan's Honda and technology partnership with Daewoo, the Arcadia was essentially the base level Legend. At the time of the Arcadia’s introduction, it was the largest engine, with a 220 horsepower V6 3.2 C32A, and the starting price was also high 4,190 million won. ABS, dual airbags, safety belt pre-tensioners, and the most advanced car safety features at the time, commensurate with a focus on protecting the passengers.

Some of the features included driver's seat position memory function and front heated seats, push-button door opening and closing devices, automatic climate control air conditioning. After the acquisition of Ssangyong and Daewoo Motors, Daewoo cars entered with the Daewoo Chairman and remaining stock of Arcadia sedans were price reduced, with the Arcadia ending production in December of that year. 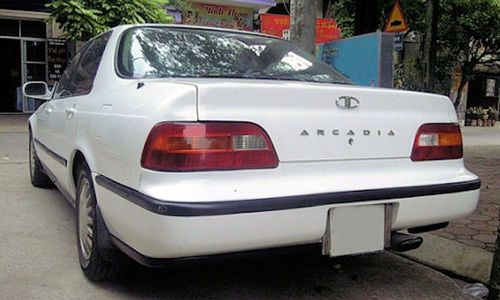