The Daewoo Tico is a city car produced by the Korean automaker Daewoo Motors from 1991 to 2001.

The Daewoo Tico was based on the 1988 Suzuki Alto. The car was equipped with a three-cylinder 796 cc S-TEC engine and came with either a five-speed manual transmission or three-speed automatic transmission. The Tico was exported to Europe, mainly to eastern markets. It was highly popular in such countries as: Romania, Bulgaria, Macedonia, Poland, Czech Republic, Croatia and Slovenia. It was also exported to Latin America where it also was named Daewoo Fino for some markets. It was especially popular in Peru, where it remains as one of the most popular car models used for taxi services.

Daewoo expanded to Western Europe at the beginning of 1995, but the Tico was never sold in any of these markets, although its successor, the Matiz, was launched there in 1998, and went on to be a sales success.

Over its years of production, the Tico underwent serious modifications to its specifications, mostly to the engine. Originally equipped with a carburetor and producing 48 bhp (36 kW), it was later upgraded to fuel injection, thus passing the Euro 2 pollution standard, whilst also giving an increase in power output. Some versions of the Tico in the Korean domestic market were powered by liquefied petroleum gas.

Daewoo assembled the Tico at both the old Oltcit factory in Romania, and at the FSO factory in Poland.

In 2000, the Tico was replaced with a new car, the Daewoo Matiz. The Tico was sold alongside the Matiz until 2001. 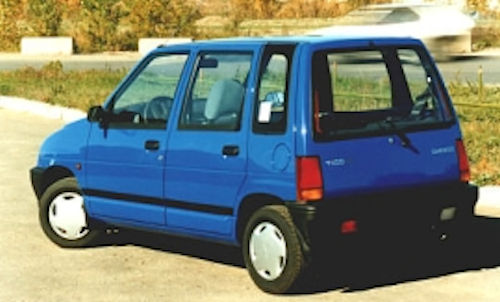