The Dacia Duster is a compact sport utility vehicle (SUV) developed by the Romanian automaker Dacia. Officially revealed on 8 December 2009, it became available in Europe from 18 March 2010.

The Duster is offered with two-wheel or four-wheel drive. The 4x4 variants make use of Nissan's all-wheel drive systemwhich allows the driver to choose from three different driving modes: Auto, in which the rear-wheel drive is engaged automatically in case the front wheels loose grip, Lock, whereby 50 per cent of torque is consistently fed through the rear axle, and 2WD where the transmission is locked into front-wheel drive for maximum fuel efficiency.

On the passive safety front, Dacia Duster comes as standard with two front airbags (depending on market) and three-point seat belts with load limiters for the front seats. Depending on version, two lateral head/thorax airbags are fitted in addition to the driver and passenger front airbags to provide additional protection in the case of side impact. Pyrotechnic pretensioners for the front seats (depending on version) complete Dacia Duster's retention system.

In June 2011, Renault revealed the Duster in South America at the Buenos Aires Motor Show. It will be produced at its Curitiba plant in Brazil for distribution in Brazil, Argentina, and Chile, and at the Sofasa plant in Colombia, to be sold in Mexico and Ecuador with marketing planned to start in the last quarter of 2011. At a later date, the Duster will go on to be manufactured at the Avtoframos plant in Moscow, Russia with about 80,000 annual quantities, being available since 1 March 2012 with prices starting from about $14,400.

It has also been confirmed that the Duster will be released in the UK in 2012, relaunching the Dacia brand there.

A competition version of the Duster fitted with a 350 hp (261 kW) V6 engine and driven by Alain Prost took part in the 2009/2010 French ice racing championship Trophée Andros, finishing in second place.

In 2010, the Duster participated in the Rallye Aicha des Gazelles, being first in the crossover class. The two Dacia teams successfully finished the Rallye on board the Duster: Dounia and Isabelle (Team 315 - Dacia) were first in the general ranking, while Nathalie and Dorothée (Team 316 - Dacia) finished in 5th place (out of 8 teams competing in the class).

In 2011, Dacia announced that they would be racing the Duster in the "Unlimited Class" of the Pikes Peak International Hill Climb. The Dacia Duster 'No Limit' will be powered by an 850 bhp version of the VR38DETT engine used in the Nissan GT-R mated to a six-speed sequential transmission. The car is tuned by Tork Engineering, Sodemo and Renaultsport and will be driven by three-time Trophee Andros winner Jean-Phillipe Dayraut.

Two Renault Duster prototypes will take part in the 2013 edition of the Dakar Rally. They are powered by 3.5-litre V6 engines, developing over 300 hp (224 kW), and will be driven by Emiliano Spataro and José García, with Benjamin Lozada and Javier Mauricio as co-drivers.

This concept vehicle (a SUV/sports coupe crossover ) addressed the needs of families, with a roomy cabin in a compact package and a large 470 L (124 US gal; 103 imp gal) trunk. The car had a very efficient motor capable of emitting 139 grams of carbon dioxide per kilometer and a fuel consumption of 5.3L/100 km (44.38MPG US, 53.3MPG Imperial). The Dacia Duster was the first concept car entirely made by Dacia.The Duster normally has four seats but can be converted into a two seat car, the passenger seat slides under the driver's seat and the right back seat slides under the left back seat freeing an extra room of 2,000 L (71 cu ft) ideal for a bicycle.

Former use of the name

Dacia Duster was also the name used to sell the ARO 10 on some markets, such as the United Kingdom, during the 1980s and early 1990s.

British motoring journalist Jonny Smith took the Duster on a road test in Morocco for the Fifth Gear TV programme, describing it as "brilliant"; "I really like this". He particularly praised its handling on poorly-maintained mountain roads.

The Dacia Duster won the Best SUV from the Scottish Car of the Year 2012 held at Glasgow on the 14 October 2012.

The Dacia Duster was named "The Bargain of the Year 2012" by Top Gear magazine.

The Indian version of Dacia Duster, the Renault Duster (launched in July 2012), has won the prestigious Indian car of the year award, awarded by a jury comprising leading automotive magazines of the country.

The car has been built on Logan platform, it has an overall length of 4.31 meters, and a width of 1.82 meters. The Duster has been pitched as an Urban SUV and its 205mm high ground clearance helps it become compatible both for city rides and uneven terrains. To add more off-roading capabilities the suspension system as well as the underside have been strengthened. Renault Duster is made available in both petrol and diesel options. The petrol trim of Duster houses a 1598cc I4 DOHC engine that produces 102 PS at 5850 rpm and a maximum torque of 145 Nm at 3750 rpm . The diesel powered Renault Duster comes with a 1461cc Turbocharged, I4 SOHC engine; this engine has been tuned for two different power figures: 110 PS and 85 PS of power. The diesel engine has also been offered in two different transmissions; 5-Speed manual and 6-speed manual. 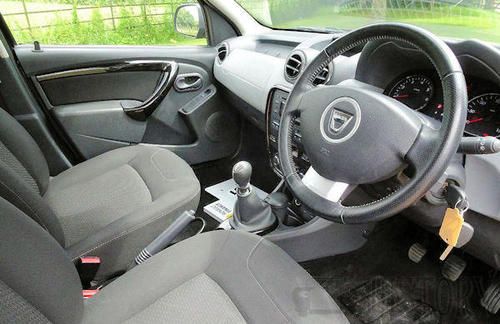 Having equipped with a bunch of several basic safety features including engine immobilizer, door open warning lamp, central locking and engine protective under guard as standard features, the Duster proves it to be a safe car. It also comes with advanced safety features like Anti-lock Brake System, Emergency Brake Assist besides Electronic Brake-force Distribution, stability control module, two front air-bags and three-point seatbelt tensioners features are incorporated as per the variants.

Renault Duster Petrol RxE This is the base petrol variant powered by a 1.6-litre, 8 valve, 105 PS engine . The engine is mated to a 5-speed manual gearbox. The SUV comes with black fabric upholstery with chrome gear knob and other standard features.

Renault Duster Petrol RxL This is the top-end petrol variant, it comes with the standard safety features like engine immobilizer, door open warning lamp, central locking and engine productive under guard. The SUV has a power air-conditioning system with heater and pollen filter.

Renault Duster 85PS Diesel RxE This is the base diesel variant of the Duster, powered by a 1.5-litre, 4-cyl. in-line engine that is capable to produce an output of 85PS at 3750rpm. This variant returns a fuel efficiency of 20.46kmpl with a CRDi fuel supply system. The Duster RxE Diesel has ABS along with EBD and Brake assistance.

Renault Duster 85PS Diesel RxL This is the mid-variant of the vehicle, which comes with the same 1.5-litre dCI diesel engine, mated to a 5-speed manual gearbox. The variant comes with Key-less entry, passenger vanity mirror, front map lamp, 2 cup holder, front and rear reading lamp, which are some of the standard features.

Renault Duster 110PS Diesel RxL This is the better tuned diesel variant of the Duster, which is powered by the 1.5 dCi engine that can produce an output of 110 PS at 3900 rpm. This engine is matted to a 6- speed manual transmission gearbox. It has ABS with EBD and Brake assist as standard safety features. The SUV comes with body coloured outside door mirrors, stylish roof rails, door side sills, steel wheels, rear glass wiper and washer. Trendy beige coloured seat fabrics with a glossy piano black floor console gives the cabin a luxurious feel.

It is the same Duster 110PS Diesel RxZ variant but it is bestowed with leather pack apart from the features seen in diesel RxZ variant. The interiors of this model are plush with leather fabric upholstery, leather gear knob finish and chrome door handle finish. The centre fascia,floor console,door trim decorative strip and door handles add more appeal to the car.

Renault Duster 110PS Diesel RXZ Optional with Nav This is the most expensive variant in the Duster line-up and is fully loaded with features like leather upholstery, Anti-lock Braking System, Electronic Brake-force Distribution, Navigation system and more. A slightly tweaked version of the 1.5-litre, in-line 4-cylinder engine is housed under the hood that produces the maximum power output of 110 PS. 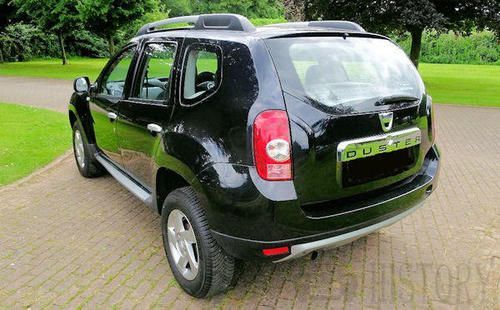