With a slightly shorter wheelbase than the sedan from which it derives, the Sandero was developed in France by Technocentre – in conjunction with Brazilian and Romanian teams.After its development, the Sandero made its formal market debut in Brazil as a Renault model in December 2007 – the first Renault model to debut outside Europe. Launched subsequently in Europe in June 2008, Renault began manufacturing the Sandero in South Africa in February 2009 and, in December 2009, in Russia. A Renault version is also manufactured in Colombia for its home market and for export to countries including Chile.

In May 2011, Renault launched in Brazil a facelifted version of Sandero, which enjoys a new face and a revised interior.

In Colombia, the facelifted versions of the Renault Sandero and the Renault Stepway were revealed at the beginning of 2012, with some differences from the other versions sold, such as the location of the doors locks and the passenger's airbag.

On the passive safety front, Sandero has been designed to meet the requirements of European regulations. Depending on equipment level, Dacia Sandero comes with up to four airbags. In terms of active safety Dacia Sandero features the latest-generation Bosch 8.1 ABS which incorporates EBD (Electronic Brakeforce Distribution) and EBA (Emergency Brake Assist).

Euro NCAP rated the Dacia Sandero fitted with the basic level of safety equipment and also crash tested the car equipped with the 'safety pack', which is standard on some variants, and optional on others. The crash test for basic level Dacia Sandero equipped with front seatbelt load limiters, driver frontal airbag and front passenger frontal airbag, scored 3 stars for adults, 4 stars for children occupants and 1 star for pedestrians.

The EuroNCAP test for the 'safety pack' model equipped with side body and head airbags and front seatbelt pretensioners, received a score of 31 for adults, 38 for children occupants and 6 for pedestrians, these results being rated as 4 from 5 stars for adults and children occupants.

Renault do Brasil, which is the Brazilian outfit of French car manufacturer Renault, released in October 2008 the Sandero based crossover mini SUV Stepway, ten months after launching the Sandero brand there. The Brazilian Stepway has a 1.6-litre 112 bhp (84 kW; 114 PS) 16 valve engine, the Hi-Flex one with bio-ethanol abilities,and it is marketed in Brazil, Colombia, Argentina and Mexico. 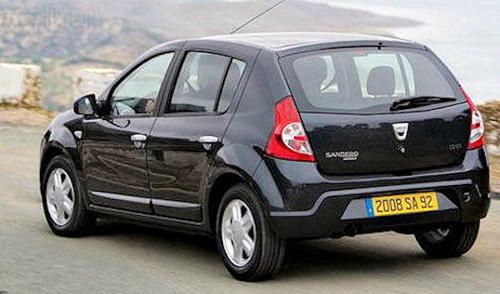 The Sandero was a running gag on Top Gear in Series 11 and 12. After Dacia sent the show a press kit, presenter James May would bring up "Good News!" about the Sandero, with Jeremy Clarkson just saying "Great!" and immediately changing the subject. This was also featured in the Big Book of Top Gear, with a page proclaiming "Good news! The Dacia Sandero is in this book!" After a few series, Jeremy had switched places with James, who would then say he didn't know what Jeremy was talking about. In the first episode of Series 13 James says "Good News", then Jeremy asks "Is it the Dacia Sandero?" to which James, bewildered, replies "No...". Afterwards the car wasn't mentioned in the season.

In Series 14, during a visit to Romania, Clarkson bought May a used Sandero as a gift. After returning from a test drive James May parked the car behind an idling lorry, and exited. As James praised the car to his co-presenters, the lorry reversed into the Sandero, damaging the passenger side. The joke was continued in Series 15, except this time referring to the Dacia Duster. It also happened in Series 18, where May brought up a new Dacia, the Lodgy. The Dacia joke returned in Series 19, in episodes one and three.

According to some sources, its second generation was intended to become the third Star In A Reasonably Priced Car vehicle but its use was prevented due to a delay in its British release.