The Dacia Logan is a small family car produced jointly by the French manufacturer Renault and its subsidiary Dacia of Romania. It is manufactured at Dacia's automobile plant in Mioveni, Romania, and in Colombia, Brazil, Russia, Morocco, Iran, India and South Africa. It is also marketed as the Renault Logan, Nissan Aprio, Mahindra Verito or Renault Tondar 90 depending on the existing presence or positioning of the Renault brand.

Designed at Renault's Technocentre near Paris, the Logan was the result of four years of development of the project X90, announced by Renault in 1999, after the buyout of Dacia in 1998.

During a visit to Russia by French President Jacques Chirac, Louis Schweitzer noted that at Lada and Renault dealerships the €6,000 Ladas were selling very well while the €12,000 Renaults stayed in the showroom. "Seeing those antiquated cars, I found it unacceptable that technical progress should stop you making a good car for €6,000." (He later revised this target to €5,000). "I also drew up a list of specifications in three words – modern, reliable and affordable – and added that everything else was negotiable." The cheapest version of the car is €5,900, and the price can reach €11,200, depending on equipment and customs duty. (The base model for Western Europe, where it is badged as a Dacia but generally sold in Renault dealerships, is somewhat more expensive).

The Logan was designed from the outset as an affordable car, and has many simplified features to keep costs down. It replaces many older cars in production, including the Romanian Dacia 1310 series of Renault 12-based cars.

It was officially launched in September 2004. Renault originally had no plans to sell the Logan in Western Europe, but in June 2005, began importing a more expensive version of the car, starting at around €7,500 It was an unexpected success with people wanting an inexpensive, no-frills car they could repair themselves

The Logan was launched in India in April 2007, as a collaboration with Mahindra, who helped Renault cut costs by 15%.India was the first right-hand drive market for the Logan. It was almost an instant success with impressive sales in the first few months.Since then Mahindra and Renault have parted ways, but the Logan continues to be sold by Mahindra, with technical support from Renault. Its awkward styling has resulted in lower than expected sales. The company has later introduced the name Verito to the car, which since then only had Mahindra badges.

On 1 July 2008, almost four years after the release of the first Logan, a facelifted version called the Dacia New Logan was announced.The new version features a more modern design and a more attractive and more comfortable interior.

The Logan is based on the B0 platform used for the Renault Clio II and for other Renault and Nissan models. It has 50% fewer parts than a high-end Renault vehicle and has a limited number of electronic devices. This makes the car cheaper to produce and easier and cheaper to repair.

Some parts are also much simpler than those of its competitors. For example, rear-view mirrors are symmetrical and can be used on either side of the car, the windshield is flatter than usual, and the dashboard is a single injection-molded piece.

The developers have taken into account several differences between road and climate conditions in developed and developing countries. The Logan suspension is soft and strong, and the chassis sits visibly higher than most other compact cars to help it negotiate dirt roads and potholes on ill-maintained asphalt roads. The engine is specially prepared to handle lower quality fuel, whereas the air conditioning is powerful enough to lower the temperature several degrees (temperatures above 40 °C are common in the Middle East and the Mediterranean Sea). 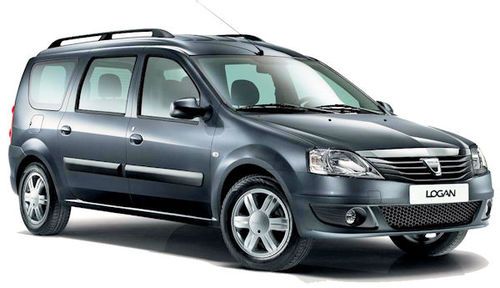 In June 2005, the car achieved a 3-star rating at the EuroNCAP crash tests. This result confirms initial expectations stated earlier by Renault.

Depending on equipment level, standard on some variants and optional on others, Dacia New Logan comes with up to four airbags. In terms of active safety, all versions of New Dacia Logan feature the latest-generation Bosch 8.1 ABS which incorporates EBD (Electronic Brakeforce Distribution) and EBA (Emergency Brake Assist). 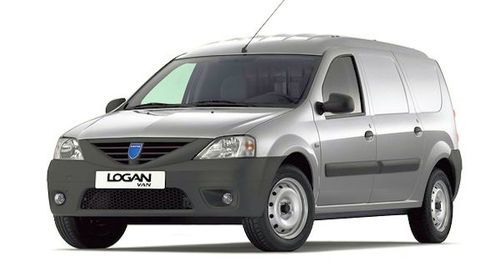 The panel van variant of the Logan was launched on 23 January 2007, in Bucharest.It is a small business oriented vehicle, with 2,500 litre loading space and 800 kg payload. The Logan VAN is more or less an MCV without the rear side windows and therefore has the same safety features and uses the same engines as the other models (except the 1.6 16v engine). Production of this model was stopped in August 2012. Since its launch, over 53,000 units were manufactured.

The coupé utility version of the Logan, also based on the MCV, was introduced on 10 September 2007 (4 October 2007 at the Bucharest International Motor Show), and replaced the Dacia Pick-Up. Sales began in Romania in 2008, with the price ranging between €7,300 and €9,450.

Starting October 2008, the Logan Pick-Up is sold in South Africa as Nissan NP200. Visually similar to the original model at launch,it received a mildly facelift in early-2009. It is being built at the Nissan plant near Pretoria, alongside the Renault Sandero.

It was removed from production by Dacia in July 2012, and reportedly will be replaced in the model range by an upcoming derived version of the Dokker

The Logan MCV (Multi Convivial Vehicle), launched at the 2006 Paris Motor Show, is the station wagon version of the Logan. It has five or seven seat versions, with a luggage space between 200 and 2,350 litres depending on how many seats are folded, and numerous storage spaces for smaller objects. It has a wheelbase longer by 275 mm (10.8 in) than the sedan, and larger rear doors for easy access to the third row of seats. It uses the same engines as the sedan,and an important improvement was the availability of side airbags. It has been considered a competitor for compact MPVs, for its dimensions and the seven-seat capacity.

Sales on the Romanian market began in October 2006 with prices ranging between €8,200 and €12,550,while sales to other countries began in early 2007. A revised version, with the new lights and bumper from the New Logan saloon, was released in late 2008. As of June 2010, Dacia produced 300,000 Logan MCVs.Production ended in November 2012, being replaced by the Lodgy.

Since 2012, it is also produced in Russia, by the AvtoVAZ company, under the Lada Largus brand name, after it was previously exhibited at the 2010 Moscow International Motor Show as the Lada Project R90. 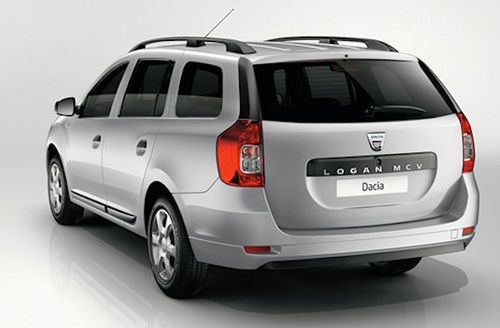