Automotive manufacturer of Czechoslovakia From 1929 to 1951. 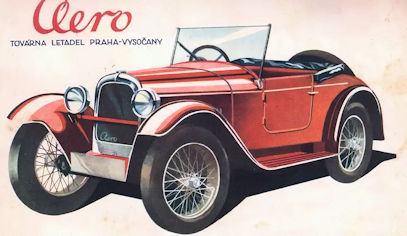 Founded in 1919, Aero based in Prague ( Czechoslovakia ) initially produced aircraft. From 1929, the product range was expanded to automobiles and light commercials due to the economic situation .

Aero produced five different production models, various race and test vehicles and prototypes in the course of its automobile production.

These first three models had rear-wheel drive. Until 1932, all had only one door on the right, then a second door.

These models were mostly designed as sports cars - two-seater roadster with a seat behind. But there were also full open or closed four-seaters. Individual vehicles were also delivered as commercial vehicles.

During the war, two prototypes, Aero P 750 Pony and Aero R 1500 Record, were developed for post-war production. Although orders from abroad were already in place, the car industry of the former Czechoslovakia , which was nationalized in the autumn of 1945, decided not to build the models and concentrate production exclusively on aircraft.

To the business not to be still completely missed and yet the foreign buyers with vehicles of the brand satisfy Aero, which at was Jawa in the war years, two-cylinder model developed (616 15kW cc) Jawa Minor II in Aero Minor renamed produced in other works and distributed under this name. The Minor was a spacious and sporty successful vehicle .