Custoca was a low-volume Austrian car manufacturer established by Gerhard Höller in 1966 to build and sell kit cars. Models included the Ford GT40-inspired Hurrycane introduced in 1971, the Lamborghini-like Strato, and, beginning in 1972, a range of dune buggies based on the popular Volkswagen Beetle. After 135 Stratos, and approximately 100 Hurrycanes were produced and sold, the company folded in 1988.

The generous support of the Lackwerke Wiederhold, which regarded the Strato as an ideal advertising medium for their "lameé flip" colors, made an exhibition at the Jochen Rindt Show 1968. The audience was enthusiastic and 12 visitors gave a fixed order for the Strato .

Since this surprising order volume was not to be mastered by a "one man show", Gerhard Höller founded Custoca in December 1968

There were serious problems with the production of the first 12 customer cars.

The door adjustments left something to be desired and glasses for front and side windows had to be made. After an immense number of working hours all the assignments were fulfilled.

In order to improve the profitability and also to leave the customer the fun and a (large) part of the production, the decision now focused on the production of kits. . The buyer received the complete body shell with fitted hoods and doors as well as the vision of his own super sports car. He himself had to contribute and only screw the technical details, glass, lights, locks, door handles, instruments, tank, seats, wallpaper, tires, rims and steering wheel.

The range of technical improvements began with lowering, cambering and axle support, and extended to long gear ratios and high-performance engines from the Porsche Super 90. .

The shape of the Strato met the customer's taste until the end of the 80s. The design was subject to a variety of changes (grill, headlight, bumper, door length, front and side windows, roof height, rear end and lights). Four stages of development are clearly visible. The last even bore the independent name Taifun (2 complete vehicles and 23 kits). Rims from the companies Ronal, Crown Prince, Lemertz, BBS and Wolfrace were mainly used. As an alternative to characteristic shed cover at the rear, a conventional glass or plexiglass could also be ordered. Approx. 20 finished vehicles was often provided with unusual colors or coatings (velvetex, electrostatic fibers, which had a textile effect).

Individual strato copies found their way to Holland, Sweden, Egypt and even Malaysia.

Its frontparty could be shaped and formed the basis for the new Custoca type "Hurrycane". With, design elements of the Ford GT 40 and Lamborghini Miura were integrated into the design. According to Mr. Höller, there was no connection with the Fiberfab Avenger from the USA. The prototype rolled on welded 8 and 10 inch wide 15mm steel rims and was painted orange. Unfortunately, this vehicle was destroyed by an accident 3 weeks after its completion. with use of  Fiat 850 standard taillights . In total, approximately 100 Hurrycane kits were built in the years up to 1988, only 3 of which were factory cars. For the last 3 (1 Italian, And 2 German) one was construed with a tube frame chassis, equipped with 8 cylinder Mercedes engine .Some "normal" Hurrycanes were sold to Sweden, Germany, Switzerland and Italy. 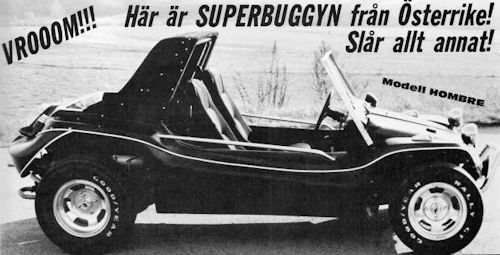 In 1972 the company Custoca was already a well-known size. A customer had bought a buggy kit from America and asked Mr. Höller for the assembly.

After some stylistic improvements (integrated headlights)  the first Custoca Buggy with name,The Junior, Amigo and Hombre models (also available on a non-shortened floor plate) were ready for the market in time for the Buggy Boom of the 70s, Despite the tough competition Custoca succeeded in selling more than 350 units in Austria. A further 350 were exported to Sweden. Special features were the original American aluminum windshield frame with laminated glass, 40 different high-gloss metallic colors as well as 5 years warranty.

In the beginning, the sports car bodies were made by hand from fiberglass. A painstaking activity took about 3 full days. In 1972, a fiberglass fiber-spraying machine

which allowed the production time to be reduced to 2 hours and 6 employees were working in shifts. The sports car bodies were injected in split molds and had seam joints. Therefore, they always had to be painted. However, buggies were colored in the gel coat layer. After about 40 prints the mold had to be renewed.

At the end of the 80s, a body was manufactured according to a customized foam model. The car (also on VW Beet platform) had been designed as a prototype for a planned production in America (possibly with a strong mid-engine)  The shape is reminiscent of a horizontally compressed Lamborghini Countach.