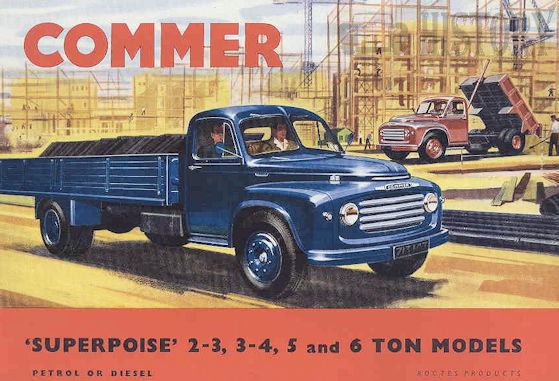 This business belonged to Commercial Cars Limited a company incorporated in September 1905 by directors H C B Underdown, barrister and director of Direct United States Cable Co with H G Hutchinson a director of Royal Exchange Assurance to manufacture: commercial cars, omnibuses, chars-a-bancs, fire engines and every kind of industrial vehicle. In 1920, it was described as the first Company to specialise in the manufacture of internal combustion industrial commercial vehicles. In order to go into volume production a site was bought in September 1905 at Biscot Road, Biscot, Luton.Construction of extensive new workshops began on the five acre site which was mostly complete by late 1906. Commercial Cars became a member of the Society of Motor Manufacturers and Traders in August 1906. It was one of the first manufacturers of commercial vehicles in the United Kingdom, its speciality being the Commer Car.

At Olympia's Commercial Motor Show in March 1907, Commer exhibited a motor-bus chassis with a 30–36 horsepower engine and a gearbox invented by Mr Linley, the works manager. Dog-clutches made the change rather than the spur wheels which remained in constant mesh. As well as the bus chassis Commer displayed a char-a-banc for thirty passengers and delivery vans being run by a substantial enterprise. 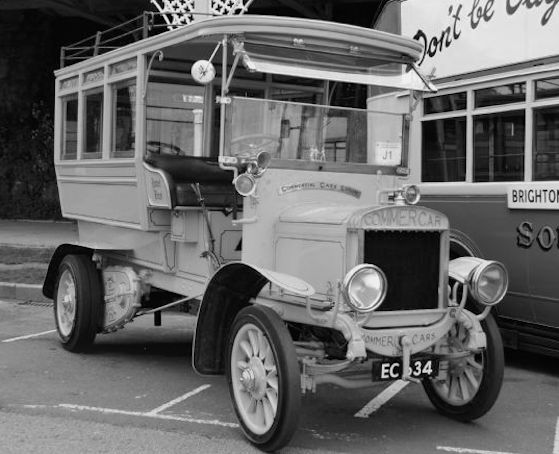 A new "large and powerful" lorry, E43, registration BM 787, took part in the Great Commercial Motor Trials in September 1907. It also had a constant mesh gearbox (Comer (sic) slogan—'dogs which bite with a click'). Unladen weight was (3.7 tonnes) 3 tons 13 cwt, the engine had four-cylinders, its output was 33 horsepower at 800 rpm. It had four forward speeds and was driven by side chains. Length 20 feet (6 metres), width just over (2.1 metres) seven feet and height (1.76 metres) two inches under six feet. The platform was (3.6 metres) twelve feet long. The newspaper noted that a Comercars "chassis" was transporting passengers at Widnes.

Production of the first truck, the 3-ton RC type started in 1907. Their first bus was made in 1909. With the outbreak of the First World War the factory turned to the manufacture of military vehicles for the British Army, and by 1919 more than 3000 had been made.

Though obliged to undergo financial restructure in 1920 in the hope of avoiding creditors, the business was unable to avoid repayment of a debt of £75,000 due to the Treasury, raised in order to pay 60 per cent Excess Profits Duty on wartime activities. Eventually, after agreeing terms with the Receiver in 1925, Commer was bought in 1926 by Humber. In 1931 Humber became a 60-percent-owned subsidiary of the Rootes Group.

The Commer name was replaced by the Dodge name during the 1970s, following the takeover of Rootes by Chrysler Europe. After Peugeot purchased Chrysler Europe in 1978, the Commer factory was run in partnership with the truck division of Renault, Renault Trucks. For some time, it continued to produce the Dodge commercial truck range with Renault badges, and there was a small amount of product development. Eventually, Dodge production was cancelled in favour of mainstream Renault models, and there was a switch to the production of Renault truck and bus engines in the early 1990s. 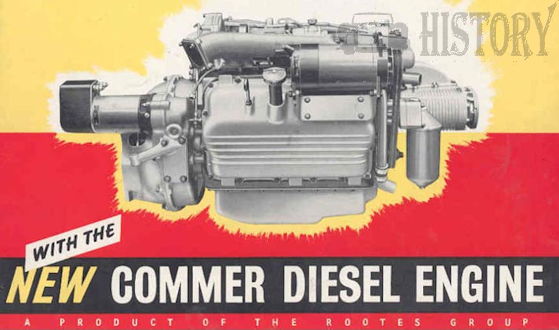 Many Commer vans and lorries are notable for being fitted with the Rootes TS3 engine, a two-stroke diesel three-cylinder horizontally opposed piston engine, which came to be known as the "Commer Knocker" owing to the distinct noise it produced.Newer Commer vehicles had Perkins and Cummins diesel engines, and, less commonly, Mercedes diesel engines.