Rootes' intention for the engine was to produce a new range of Commer trucks with the modern "cab forward" design, which required an engine low enough to mount under the driver's cab rather than in front of it as previously. Eric W Coy, Rootes' Chief Engineer, was responsible for the development of the engine by a core team of only seven people, at the Humber plant at Stoke Aldermoor. "TS" in the engine's name derives from its Tilling-Stevens origins, a company acquired by Rootes in 1950. From 1954 Rootes diesel production was moved to the Tilling-Stevens plant in Maidstone, Kent.

1959 Commer truck designed to take the "flat" TS3 engine with its horizontally mounted cylinders. With the engine mounted beneath the floor of the cab, the bonnet (hood) of the truck could be dispensed with. The windscreen and driver were then moved to the front of the vehicle, resulting in the UK's first short-cab lorry, with a cab forward design that avoided the excessive height of the tilt-cab Bedford QL.

The engine was unusual in being an opposed piston engine where each horizontal cylinder contains two pistons, one at each end, that move in opposition to each other Even more unusually, both sets of pistons drove only a single crankshaft; most opposed piston engines have a separate crankshaft at each end of the cylinder. The TS3 engine used a single crankshaft beneath the cylinders, each piston driving it through a connecting rod, a rocker lever and a second connecting rod. The crankshaft had six crankpins and there were six rockers.

The engine was a two-stroke, compression-ignition diesel engine with uniflow-ported cylinders. Scavenging was performed by a Roots blower.which was mounted on the front of the engine and driven by a long quill shaft from a chain drive at the rear of the engine. Although the engines gained a reputation for good performance, this quill shaft was somewhat prone to breaking if over-worked.

The TS3 was used in both the Commer and Karrier range of trucks. As the horizontal cylinders were lower than a vertical engine, the engine was mounted beneath the floor of the cab. The bonnet (hood) of the truck could be dispensed with, moving the windscreen and driver forward to give one of the first of the now common cab forward trucks.

Access for maintenance was generally good: a small hatch in the cab gave access to the oil and fuel filters, the injection pump and injectors. Connecting rods and pistons could be accessed from outside each side of the cab, behind removable doors, without removing the engine. As there was no camshaft or valves, this removed the usual need to access the cylinder head of a conventional engine. Even the blower could be replaced by first removing the radiator and working from the front. Only the crankshaft bearings required the engine block to be removed from the chassis.

The engine's distinctive exhaust bark was always apparent, leading to their popular name of "Knockers".

The TS3 was used in the Commer Avenger Marks II, III and IV PSV chassis, and also in a number of Integral models from John C. Beadle and Thomas Harrington Ltd from 1952-63. Initially these were a sales success, as they were more reliable and economical than the then-current diesel-engined variant of the Bedford SB, however the noise produced by the TS3 was not acceptable to tours operators and the higher body mounting compared with the SB required extra work for coachbuilders and made the Avenger more expensive than the Bedford. The last straw was in 1957 when Ford announced a PSV version of its Thames Trader, which could take an identical body to the SB and had a conventional six-cylinder diesel engine (which turned out to be quieter than either the TS3 or the Perkins R6 fitted to the SBO). From 1957 Commer Avenger sales began to dwindle. It's notable that Thomas Harrington Ltd never tooled updated versions of its Crusader body for the Avenger, although that is also perhaps due to the conservatism of the combination's sole customer Southdown Motor Services.

Rootes Group, Commer's parent company, entered into a partnership with Lister to market the engines as industrial stationary engines through a joint company Rootes-Lister Ltd. The venture was not a success for industrial engines, although some were sold as marine engines by Lister Blackstone Marine Ltd. Many of these marine engines survive today.

The TS4 engine was an enlarged four-cylinder version of the TS3. It ran 1.2 million miles as a pre-production prototype. The project was cancelled after Chrysler bought Rootes in 1968.

There are very few similar engines. Opposed-piston diesel engines are rare enough at this size, the rocker lever arrangement was almost unheard of. Probably the only engine using a similar arrangement was the pre-war Sulzer ZG9. This was an opposed-piston engine with a choice of two, three and four cylinders (2ZG9, 3ZG9, 4ZG9); the two-cylinder version developed 120 bhp. Its layout was very similar to the Commer engines, but it used a piston scavenge pump rather than a Roots blower. This was mounted vertically above one rocker, driven by a bellcrank from the main rockers. This engine is sometimes cited as an inspiration for the Commer design. 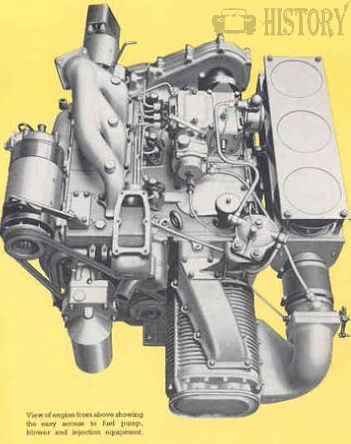