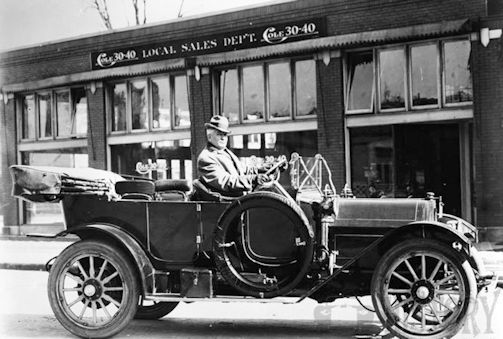 The Cole Motor Car Company was an early automobile maker based in Indianapolis, Indiana. Cole automobiles were built from 1908 until 1925. They were quality-built luxury cars. The make is a pioneer of the V-8 engine.

Joseph J. Cole made his first attempt to build a car in 1903 at Rockford, Illinois. Together with his son, he owned a shop where they sold wheels, automobiles, motor bikes, and even lawn mowers, and also performed mechanical repairs. Together they worked on a 4-cylinder touring car that was planned to be sold as the Rockford. The project went nowhere, and instead they opened a Rambler automobile dealership. 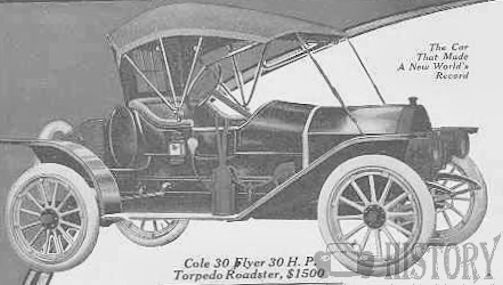 In 1904, Cole bought the Gates-Osborne Carriage Company and soon renamed it the Cole Carriage Company. There, he built his first automobile. It was a high-wheeled motor buggy with a two-cylinder engine. Legend goes that he forgot to fit brakes on this car and on his first trip, had to drive until the tank was empty.

At that time, the Cole Carriage Company already built approximately 3,000 carriages and coaches per year. Production of this car started in the same year, assisted by engineer Charles S. Crawford, who later worked for Stutz. The new car was marketed as the "Cole Solid Tire Automobile". About 170 of these high wheelers were sold before Cole decided that this kind of cars had no future.

In June 1909, Cole Carriage Company was reorganized as the Cole Motor Car Company and developed a conventional small car, the Cole Model 30. Initially, it had a two-cylinder engine that delivered 14 HP and rode on a 90-inch (2,300 mm) wheelbase. The only body style was a runabout that he offered with 2, 2/4, or 4 seats at $725, $750, or $775, respectively. The Solid Tire Automobile was still available. About 100 cars were built.

At the end of 1909 a completely new car appeared as a 1910 model. Confusingly, it was dubbed the Series 30 but, as this referred to its new 30 HP, four-cylinder engine. 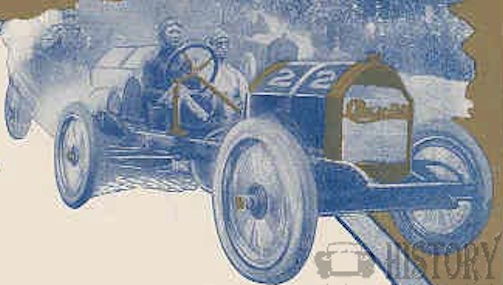 The "Flyer" was quite successful in automobile races, too. One of them won the 1909 Brighton Beach Marathon, a 24-hour-race with 16 participants. Also, two Series 30 Flyers, driven by William "Wild Bill" Endicott and Louis Edwards, entered the Massapequa Sweepstakes, one of the 1910 Vanderbilt Cup Races. Endicott won the prestigious 10-lap event, covering 126.4 miles (203.4 km) in 138 min 4.32 sec.

Cole could shuffle with models and engines the way it did for two reasons: The first was that until 1915, the company refused to offer their cars on a yearly model change but relied on series that were replaced when management felt the necessity for it. Many early cars were built this way, and Packard, for example, stayed with this system until late in the 1930s.

The second reason was that the Cole was an assembled car; that means that all important components such as engine, clutch, transmission, axles etc. were bought from outside sources. Manufacturers of such cars had a slightly lesser reputation than those who built all parts themselves. For Cole, this was not only the simpler way to build a car, but Joseph Cole thought that specialized suppliers could give more attention to their items. Thus, he preferred the term "standardized car" over the usual "assembled car". 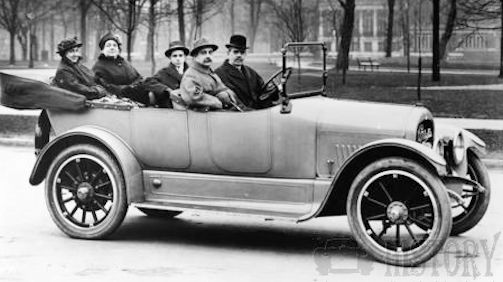 Big news came in mid-1915: Only one year after Cadillac had pioneered the V-8 engine, and about at the same time as the mighty Cunningham V-8 debuted, Cole brought out its own V-8 powered automobile - and would stay with it until the very end of the make, dropping its Fours and Sixes after 1916.

Cole opened new, wider production facilities in 1922. However, sales went down rapidly, mainly because of a short but severe recession. Although there were more models to choose from and prices were reduced drastically (most to a level under that of 1918 / 1919), only 1,722 cars were built of the Model Aero Eight 890, as the car was called that year. The wheelbase was increased by a quarter inch, and the frame ends were split. The Sportcoupe had a weight of 4,155 pounds (1,885 kg). The car was priced at $3,385 with a 75 mph (121 km/h) speedometer.

Innovations in 1923 for the Series 890 Cole were stylish drum-type headlights, cowl ventilation, and a new windshield with an adjustable upper half on open cars. Other elegant details were wire wheels instead of the previously used "artillery wheels" with fashionable disc wheels on the option list. For this year only, some cars had an added sporty touch with runningboards that did not span the whole length, leaving the chassis-mounted spare wheels "free". Still, with eight types of bodies, prices for open cars were slightly up while those for closed cars remained the same. The most expensive 1922 model, the $4,185 "Tourosine", was gone as were all those strange names, with the exception of the "Sportsedan". Only 1,522 cars left the factory that year.

In this situation and without any debts yet, J. J. Cole decided to liquidate his company rather than risking his fortune by going on. So, it is no wonder that the Model 890, now also called "Master" series, went little changed on the show room floors. Full-length running boards were back on all models. There were seven body styles, again sharply reduced to prices as low as $2,175 for open bodies, $2,750 for a coupe and $3,075 for other closed cars. A Cole was honored to pace that year's Indy 500 race.

Before the curtain finally fell, there were five cars available for 1925. Balloon tires (34" × 7.3") were now standard equipment, and the cars got new two-piece rear bumpers, so-called "bumperettes". Although Joseph Cole began liquidating his firm early in 1925, 607 cars left the factory. He died suddenly of an infection on August 8, 1925, shortly before liquidation was finished.