Automotive Manufacturer of United Kingdom from 1971 to 1987 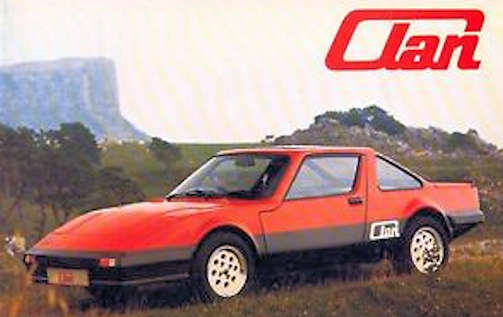 The introduced in 1971 Clan Crusader was based on the Hillman Imp . Its 875 cc four-cylinder in-line engine with overhead camshaft made 51 bhp (38 kW) and was installed in the rear.The small, two-seat sports car was equipped with a fiberglass body and was also often used in competitions.

In 1974, the production ended after about 350 manufactured vehicles.

Between 1982 and 1987, presented Clan Cars (NI) from Belfast in Northern Ireland.The first model without its own model name was based on the original Crusader with rear engine, but had pop-up headlights . This resulted in about 130 vehicles.

There were also from 1986 to 1987, the clan Clover. He had a mid-engine from Alfa Romeo , a large tailgate and flared rear fenders . This resulted in about 26 vehicles.