The Citroën Type A was produced from June 1919 to December 1921 in Paris. It was the first Citroën.

During World War I, André Citroën was producing munitions. As early as 1917, Citroën investigated the development of a light car of the medium range under the direction of Jules Salomon.

Under the designation 10 HP Type A the car had a water-cooled 1327 cc four-cylinder engine and an output of 18 hp (13 kW). Its maximum speed was 65 km/h (40 mph). The chassis had inverted quarter elliptic springs at the front and double quarter elliptics at the rear. Braking was on the rear wheels only controlled by a hand lever with a foot pedal operated transmission brake.

The chassis was made in two lengths and carried a variety of coachwork. The long chassis was available as Torpedo (four-seat tourer), Torpedo Sport, Conduite Intérieure, Coupe de Ville and light truck and the short chassis with Torpedo (3-seat), Conduite Intérieure, Coupe de Ville and camionette (van). The shorter 2,550 mm (100.4 in) wheelbase chassis was available only on demand until the start of 1920 after which the option was withdrawn in order to maximize standardization and derive the resulting cost and efficiency benefits.

In its first year of production, the standard Type A cost 7,950 francs. One year later the selling price had been raised to 12,500 francs.

After a slightly hesitant start in 1919, sales took off in 1920, during which more than 20,000 cars emerged from the factory in a single year. With a production rate of 100 vehicles a day, Citroën became the first mass production manufacturer in Europe. 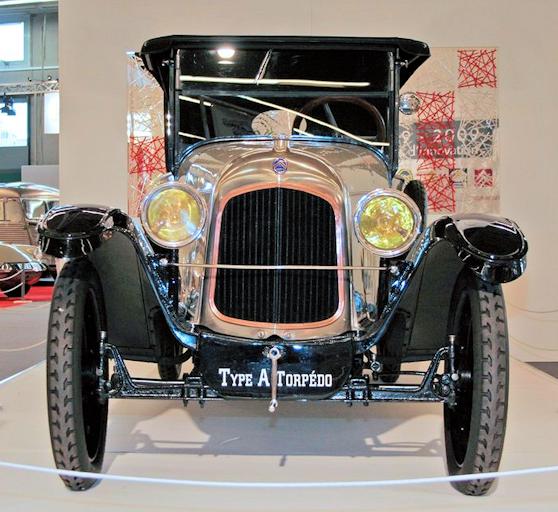