The Citroën C4 Picasso is a compact multi-purpose vehicle (MPV), available as a five-seater and a seven-seater version, called the Grand C4 Picasso. produced by French manufacturer Citroën. The seven-seat Grand C4 Picasso made its debut first, at the Paris Motor Show in September 2006, with the five-seat version following in January 2007.

The C4 Picasso and Grand C4 Picasso were designed by Donato Coco for the French manufacturer Citroën and share the same platform and engines with the Citroën C4 and the Peugeot 307. The C4 Picasso is the luxurious alternative to the budget Citroën Xsara Picasso, another vehicle in Citroën's MPV line-up.

The first generation Grand C4 Picasso, a seven-seater, was launched in November 2006 and produced until 2013, when the Second generation took over. The vehicle shares the same platform and range of engines as the Citroën C4 I and Peugeot 307.

The five seater C4 Picasso was officially unveiled early in January 2007, launched in February, and was displayed at the Geneva Motor Show in March.

Both vehicles feature a large panoramic windscreen and thin door pillars to enhance the driver's field of vision, eliminate blind spots, and increase the amount of light inside the front cabin. In addition to the front sun visors both vehicles have two blinds attached to further reduce glare and unwelcome lights for the driver and front passenger.

The Grand C4 Picasso is slightly larger than its nearest seven-seat MPV competitors like the Mazda5 and Opel/Vauxhall Zafira Tourer, and larger than earlier large MPVs such as the Citroën Evasion and Opel Sintra.

The vehicle has 500-litres of boot capacity and 1,951-litres with all rear seats down.

Rear parking sensors are available only on the Exclusive trim.

A pneumatic rear suspension is available as an option which make the ride smoother and can lower the sill. In some markets this option is only available on higher trim levels.

Some of the C4 Picasso models feature Citroën's new 6-speed manual gearbox, Efficient Tronic Gearbox 6-speed (ETG6). It allows the driver to switch, at any time, between manual and automatic.

The four-speed automatic, six-speed ETG and six-speed automatic transmissions have two shifting options of either the fully automated/automatic mode or the paddle-shifted manual mode, chosen by a column mounted mode selector. The ETG/automatic gearbox also brings with it an air conditioned storage compartment (fridge) including can holders, between the driver's and the front passenger's seat, where the manual transmission lever would usually be.

The first generation C4 Picasso to be tested by the European New Car Assessment Programme (Euro NCAP) was a Left-hand drive 2006 model. It received an overall five star rating due to the design and range of default safety features, including: front airbags for the driver and passenger, a driver's knee airbag, side body airbags, and side head airbags. The vehicle was penalised in the crash tests for the risk of leg injuries caused by the dashboard, and for chest injuries to the driver in a side impact. In the front impact test the child restraint in the back seat tipped forward, striking the dummy infant's head on the driver's seat, and lost all head protection points for the dummy.

The Second generation C4 Picasso has six airbags by default, with adjustable pressures; two airbags for the front, two lateral for the passengers, and two side curtain airbags to prevent head injuries.

Scoring 111 points on the UK Reliability index, the C4 Picasso is considered unreliable when compared to the average vehicle score of 100, while a very reliable vehicle scores 60 or below. The average age and repair cost of the tested C4 Picassos was 40 months and GB£325. 58.62% of the repair costs were attributed to the axles and suspension, while air conditioning and transmission repairs were rare and featured at the bottom of the list at 0% each.

Multiple C4 Picasso recalls have been announced by Citroën since 2006. These have been focused on a small number of vehicles mostly, with the exceptions being: 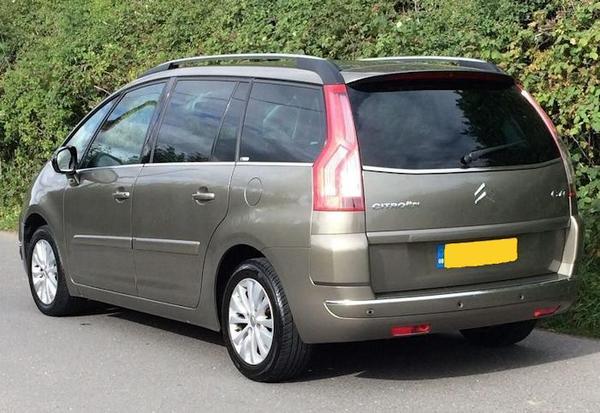